Run may refer to any of the following:

1. In general, run is also used to describe the process of starting software or executing a script. For example, your computer is running an Internet browser to view this web page.

How do I find what's running?

To determine what is running in Windows, use the Windows Task Manager. 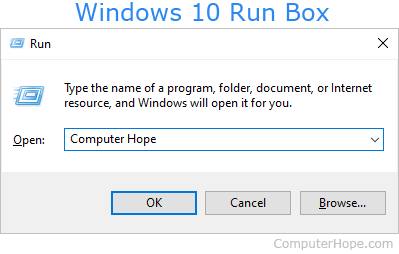 Press Windows key+R on the keyboard at any time to open the Run box in any version of Windows.

Enter an environment variable in the Run box to open a specific Windows folder.

Windows 8 introduced the Windows Start Screen and still supports the ability to run a program. To run a program, start typing while on the Start Screen. You can also use the keyboard shortcut Windows key+R to open the Run box.

Windows Vista introduced the Windows Search Box, which enabled users to search for files and run programs at the same time. With the introduction of this feature, the Run box is no longer located in the Start menu. However, if you still want to use the Run box in Vista or Windows 7, type Run in the Search box, and press Enter, or press the keyboard shortcut Windows key+R.

All early versions of Windows include the Run box in the Windows Start menu. Also, you can press the keyboard shortcut Windows key+R to open the Run box at any time.

How to use the Run box

Any executable file that is located in the C:\Windows directory can be run by name. For example, the executable for Microsoft Calculator is calc.exe. If you want to open the calculator from the Run box, type calc and press Enter.

How to run a file using the full file path

Executables can also be run by typing the full file path. For example, you can open the Microsoft Calculator by typing c:\windows\calc.exe and pressing Enter. By default, Windows parses the Windows directory, so typing calc.exe opens the Calculator, as well.

How to open Control Panel items from the Run box

Any of the associated Control Panel icons can also be started from the Run box. For example, in the Run box, typing appwiz.cpl and pressing Enter opens the Add/Remove Programs feature found through the Control Panel. See the link below for a full list of Control Panel files.