A tab may refer to any of the following: 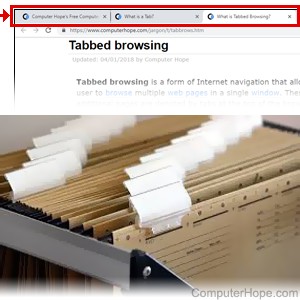 1. In computer software (e.g., Internet browser), a tab is a clickable area at the top of a window that shows another page or area. When a tab is clicked, the tab's contents are shown, and any other open tab is hidden.

Tabs allow you to switch between options in a program, separate documents, or web pages. The currently-selected tab is usually underlined or highlighted in a different color than the other tabs. The interface is designed to resemble the tabs at the top of traditional file folders, as viewed from inside a file cabinet.

In a browser, tabs allow you to load multiple websites and quickly switch between them, without each of them needing a separate window. See our tabbed browsing definition for a complete explanation and examples of using tabs in a web browser.

The following image shows two tabs at the top of the Google Chrome browser.

How to open a new tab

In any open Internet browser, you can click the "+" sign (shown above) on the right of the current tab to open a new, blank one. You may also use the keyboard shortcut Ctrl+T on Chromebooks and PCs and Command+T on Macs to open a new tab.

How to close a tab

Each open tab can be closed individually by clicking the "X" on the right side of the tab. If the tab does not show an "X," try hovering the mouse pointer over the tab.

To close a single tab at a time in most Internet browsers, press Ctrl+W on your keyboard.

How many browser tabs can be open at the same time?

There is no specific maximum number of tabs that can be open simultaneously in a browser. However, they are limited by how much RAM a computer has installed. Each browser tab uses a bit of memory and once all RAM is used up, opening more tabs causes the computer to run very slow or potentially causes the browser to crash.

In general, your computer is likely able to open more browser tabs than you ever need or use. However, if you open enough browser tabs to use all the available RAM, you can usually install more.

You can switch between opening tabs by pressing Ctrl and the tab number. For example, if you had four tabs open and pressed Ctrl+2 it would open the second open tab. Use the Ctrl+9 keyboard shortcut to switch to the last tab. 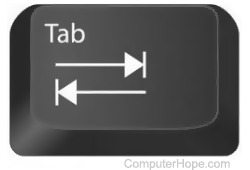 2. A tab is a typographical space commonly found at the beginning of a line of text. In a computer, a horizontal tab is represented as a single non-printable character, ASCII value 9.

Each tab character is translated by software to a variable-width spacing. Common default tab widths are four spaces (in a monospaced text document), or half an inch (in a word processor).

If formatting marks are enabled in your document editor, the tab character is often displayed as an arrow. The Tab key is located to the left of the Q key and above the Caps Lock key on keyboards.

The less-common vertical tab (ASCII 11) functions the same as a horizontal tab but vertically.

How many spaces are in a tab?

Depending on the program, the equivalent number of spaces used to create a tab is usually five or eight. Sometimes, in the case of a word processor, the font used dictates the number of spaces. However, keep in mind that a tab can be set to any value, which means a tab could also be two, three, four, six, or seven spaces.

A tab is only one character. In other words, when you press the Tab key, it is not creating several spaces in a row.

Should I use tabs or spaces for indenting?

Generally speaking, we recommend using the Tab key to create spaces because it is quicker, less prone to errors, and makes files smaller.

In computer programming or creating a code block in a program, both tabs and spaces are valid for indentation. Some programmers swear by tabs and others by spaces. Our best advice is to follow the standard set by either the original programmer or the company creating the program. If you are accustomed to spaces or tabs, you can also convert one into another in many programs. However, make sure you convert it back to the original standard after making your changes.

Matching a tab character in a regular expression

When working with a regular expression, a tab is matched with the "\t" metacharacter or escape sequence with many programming languages. For example, with the Perl code below, if the $example variable contains any tab characters, the script prints "I found a tab!" when it is run. You can also use "\s" to find any whitespace, which means tabs or spaces would be found.

3. In a software program window and an Internet browser, a tab or window tab allows the user to access different parts of a menu, program window, or web page. Below is an example of what tabs look like in a Microsoft Windows setting. 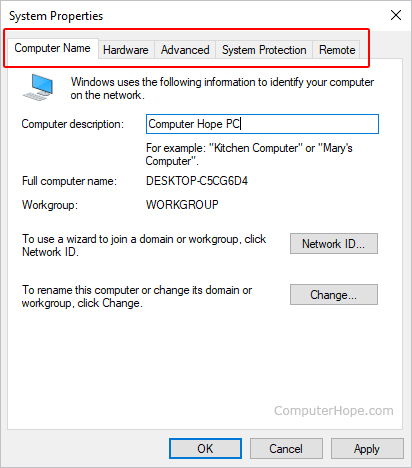 4. Tab is a key (shown right) on the far left side of nearly all computer keyboards with many uses. For example, in a word processor, the Tab key may insert a tab character or advance the typing cursor to the right by five characters. This key can also move between selectable items in a dialog box or switch between tabs in an Internet browser.

Where is the Tab key on the keyboard?

The Tab key is highlighted in blue in the image below.

Why is there a right and left arrow on Tab?

The Tab key can move to the right or left, although most people only use it to go to the right. The left arrow is on the key because if you press Shift and Tab simultaneously, the tab moves backward.

For example, you can press Alt+Tab to move forward between open windows in Microsoft Windows and other operating systems, whereas pressing Ctrl+Shift+Tab moves backward. The same is true with open tabs, as mentioned earlier on this page. For word processors and other programs dealing with text, pressing Shift+Tab decreases the indent. With early versions of Microsoft Word, you may have to press Ctrl+Shift+M.

How is the Tab key used, and what is its function?

The Tab key is most often used to indent text on a computer. Below is a list of all the different ways the Tab key can be used on your computer.

When filling out an online form, press the Tab key to move to the next field in the form without using the mouse.

Should I capitalize "Tab" in my writing?

When writing about the Tab key on a computer keyboard, Tab should always be capitalized. Other tab versions mentioned on this page should be lowercased unless used at the beginning of a sentence.

What keyboard shortcuts use the Tab key?

Below are links to keyboard shortcut keys that use the Tab key.

Where is the Tab key on smartphones and tablets?

All Android devices, Apple smartphones (iPhone), tablets (iPads), and other mobile devices with touch screens don't have a Tab key. Instead, tap the spacebar on the on-screen keyboard several times to create the desired indent for text.

5. A tab is a plastic piece used to enable/disable write protection on floppy diskette drives.

6. When referring to a command, tabs is a Linux command that sets tabs in the terminal. See the tabs command for further information.

7. A tab is sometimes used as an abbreviation for a tablet.