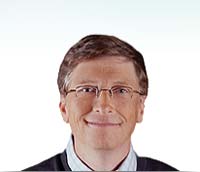 "It's fine to celebrate success, but it is more important to heed the lessons of failure."

"Be nice to nerds. Chances are you'll end up working for one."

"If GM had kept up with technology like the computer industry has, we would all be driving $25 cars that got 1000 MPG."

"Success is a lousy teacher. It seduces smart people into thinking they can’t lose."