What should I do when a computer freezes or locks up? 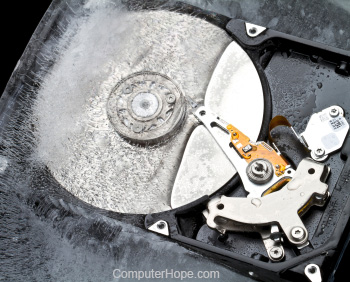 This page contains recommendations on what to do if a computer freezes or deadlocks. If your computer has stopped responding, follow the steps below to attempt to get the computer to unfreeze.

Some programs have an autosave feature. If you were editing a document at the time of the lockup, it might be recoverable after rebooting. If your program does not have an autosave feature, you may lose all unsaved work due to a freeze or deadlock. It is important to save your work often to minimize or prevent this possibility.

If only your mouse is frozen or not working, see: Mouse not detected or working in Windows.

Give the computer some time

Wait. Give the computer a few minutes to process. Sometimes a computer may appear frozen, but it's only slow or busy processing a complex task.

Is the computer deadlocked?

See if the computer responds by pressing Caps Lock on the keyboard and watching the Caps Lock LED (light) to see if it turns on and off.

If nothing happens, the computer is deadlocked, and you must reboot the computer. If the computer can turn Caps Lock on and off, continue to the next step.

End Task the not responding program

If the Caps Lock can turn on and off, Windows is still working, but another program may not be responding, causing the computer to freeze. Press Ctrl+Alt+Del to open the Windows Task Manager. If the Task Manager can open, highlight the program that is not responding and choose End Task, which should unfreeze the computer.

It could still take ten to twenty seconds for the unresponsive program to be terminated after choosing End Task.

If the Task Manager opens but the mouse is still not working, it may be a problem with the mouse.

If none of the steps above helped, you must reboot the computer. To reboot a frozen computer, press and hold down the power button until the computer turns off. Once the computer is off, wait a few seconds, turn it back on and let it start as usual.

What happens to any work not saved?

Any work not saved is lost when a frozen computer needs to be rebooted. In some situations, some programs may autosave your work every few minutes. If the program you are using performs this action, you can recover the work up to the last autosaved state.

If you tried all steps above and the computer still freezes, there may be defective hardware or a device driver not working correctly. A defective hard drive, stick of RAM, video card, or another piece of hardware can cause a computer to freeze. A device driver can also cause a computer to freeze if it's out of date, conflicting with another driver, or not working correctly.

If you determine that a defective piece of hardware is causing the freezes, replace the hardware right away to prevent further damage to the computer. If a device driver is at fault, download the latest driver from the manufacturer's website and install it before the computer freezes. Alternatively, you can use another computer to download the driver and try installing the driver on your computer.

If you cannot install the latest driver before the computer freezes, another option is to start the computer in Safe Mode. Once in Safe Mode, you can access Device Manager and uninstall the hardware device corresponding to the device driver that is not working correctly. Then, restart the computer and load it to Windows normally. Windows should detect the hardware you uninstalled and try to reinstall the device driver. This process may be enough to fix the issue and stop further freezes from occurring. You can also try installing the latest driver at this point to make sure your computer is up-to-date for that device driver.

You can also try accessing the computer BIOS and disabling any faulty hardware to see if that stops the freezes from occurring. If this helps, consider replacing that hardware.

Other possible causes for a computer being frozen

A computer can freeze or lock up due to many reasons. Some additional common causes include the following.

Click the link below for more information about the causes above and other possible causes and ways to troubleshoot.

Take PC to a repair shop

If the options above do not work, we recommend taking your computer to a computer repair shop and asking a computer technician to diagnose and fix the problem.