How to create extra space in HTML or a web page 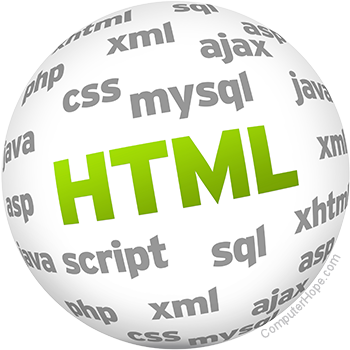 Creating extra blank space in your HTML on a web page can be achieved in many ways depending on the type of space you want to create. The following sections contains different ways to create extra space using both HTML and CSS in an HTML editor like Dreamweaver or a text editor like Notepad.

Creating extra spaces before or after text

One of the most confusing things to new users who're creating a web page is that they cannot press the spacebar multiple times to make additional spaces. To create extra spaces before, after, or in-between your text, use the &nbsp; (non-breaking space) extended HTML character.

For example, with the phrasing "extra    space" using a double space, we have the following code in our HTML.

If you are using a WYSIWYG editor to enter the code above, you must be in the HTML tab or editing the HTML code.

Keep spacing in text that is pasted to a page

The example above is done using the below HTML code.

If you are using a WYSIWYG editor to enter the code above, you must be in the HTML tab or editing the HTML code.

Creating extra space around an element or object

Any HTML element can have additional spacing added to the top, right, bottom, or left. However, make sure you understand the difference between margin and padding before deciding the type of space you want to add around the element or object. As seen in the picture below, padding surrounds the element, within the border, and the margin outside the border. 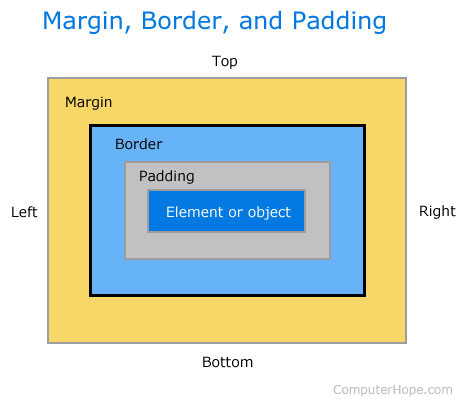 The example below shows our paragraph surrounded by a border, indented with a margin, and with spacing on the right and bottom.

An example of a paragraph with margin and padding.

The example above was created using the code below.

In the first section of the code, "margin-left: 2.5em;" adds a left margin of 2.5 em, which gives the appearance of indented text. As shown by the example, this spacing is outside of the border. In the next section, "padding: 0 7em 2em 0;" is defining the top, right, bottom, and left (clockwise) padding. There is "0" top padding, "7em" right padding, "2em" bottom padding, and 0 left padding. The remainder of this example is defining how the border should look.

A tab can be created in HTML by adjusting the left margin of an element. For example, this paragraph has a left margin of 2.5 em from the element containing the text. The CSS to create this left margin is shown below.

After placing this code in our CSS file, we can apply the "tab" class to any text to create the appearance of a tab. The value of the margin-left can be increased or decreased depending on your needs.

Although we recommend the method above, the margin-left CSS can also be added inline, as shown in the example below.

An example of a 5em left margin.

Add space below a line or paragraph of text

To add extra space below a line or paragraph of text, or push text down lower on the page once, you can use the <br> tag. Below is an example of how this technique can be applied.

The code above creates the text shown below.

As you can see, two breaks add the space above.

Additional breaks can be added if needed. However, we suggest using the CSS method mentioned earlier to add padding and spacing around your text if being done in multiple places on a page.

The spacing between lines of text can be adjusted by increasing and decreasing the line-height using CSS to make the text easier to read. Below is an example of extra line spacing being added to a paragraph of text.

The code above creates the text shown below.

In our example above, we used 3.5 em as the line-height to help emphasize the spacing between the lines. However, for readability, we recommend using around 1.7em. Adding some additional spacing between lines always improves the readability of your text. However, adding too much can make it more difficult to follow and scan.