BSoD may refer to either of the following:

1. Alternatively called a bluescreen or bugcheck in Microsoft Windows NT, 2000, and XP, BSoD is short for Blue Screen of Death and is a full blue screen Windows error message.

Microsoft Windows 11 is changing the blue screen to a black screen.

Below are examples of how a BSoD may appear in Windows. 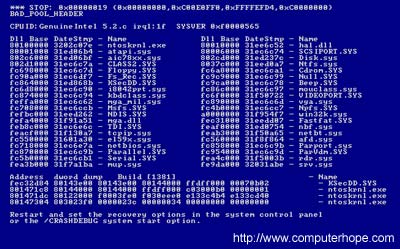 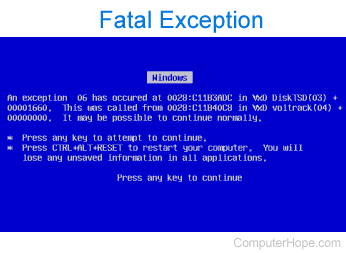 The blue screen is most commonly encountered and associated with a computer running Microsoft Windows. However, other operating systems, such as macOS, may also get a blank blue screen, which is also called a BSoD. A blank blue screen on Apple computers indicates that the hard drive in the computer is bad.

Why does Windows give BSoD errors?

The Windows blue screen errors occur when a program encounters an error. For example, programming errors such as trying to call something that does not exist or doing something that is not allowed. A BSoD can also occur with bad hardware, like bad memory that prevents data from properly being read or written.

What should I do when I see a blue screen error?

You don't have to write anything down if you have a digital camera or smartphone and can take a picture of the error message.

How can I reboot a computer with a blue screen error?

If the computer does not automatically reboot when encountering a blue screen error, press and hold down Ctrl and Alt, then press Del multiple times to reboot the computer.

Where can I find a Windows BSoD screen saver?

2. Short for Black Screen of Death, BSoD is the name of an error message that occurs on OS/2 that resembles the BSoD (Blue Screen of Death) in Microsoft Windows.

A Black Screen of Death should not be confused with a black screen, which happens when the computer has no display or isn't getting any power.