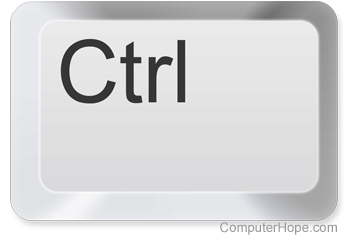 Short for control, Ctrl is a modifier key found on IBM-compatible computer keyboards in the bottom left and right portion of the main keyboard. The picture is an example of what the Ctrl key may look like on your keyboard.

See our control keys page for information about the keyboard keys, like the Home key, that help control and navigate a document and computer.

Where is the Ctrl key on the keyboard?

Below is an overview of a computer keyboard with the Ctrl keys highlighted in blue.

How do you pronounce Ctrl?

Ctrl is pronounced as "control." When writing about the key on a PC keyboard, such as a keyboard shortcut, it's written "Ctrl" but pronounced "control." For example, you'd type "Ctrl+F" but say it as "control plus F."

Apple computer keyboards also have a Control key near the Option and Command keys, as shown in the picture. The Control keys are found in the same location as the Ctrl keys on an IBM computer. However, when comparing functionality to Ctrl on a Windows keyboard, the command key is more similar.

Ctrl is used in keyboard shortcuts, such as the three-finger salute, also known as Ctrl+Alt+Del. This key combination suggests pressing and holding down the Ctrl, Alt, and Del keys to open the Task Manager or reboot the computer. Below is a list of many of the top keyboard shortcuts involving the Ctrl key.

You can click any Ctrl shortcut links below to open a page with a full list of uses for each shortcut.

See our shortcut key list for a full listing of all shortcuts.

Where is the Ctrl key on smartphones and tablets?

All Android devices, Apple smartphones (iPhone), tablets (iPads), and other mobile devices with touch screens don't have a Ctrl key. The Ctrl key is a modifier key that modifies the functions of other keys (e.g., keyboard shortcuts), which are not used with these devices.

With a computer on-screen keyboard, the Alt key is on both sides of the spacebar.

How to write or abbreviate Ctrl or control

When writing for a PC or IBM-compatible computer, the control key should always be written as "Ctrl" with a capital "C" and lowercase "trl." Early Microsoft documentation and computer keyboards used "CTRL" but have since moved to using "Ctrl." When writing for an Apple computer user, "control" or "Control" should be used to prevent any confusion with them not having a Ctrl key.

Many notations represent the Ctrl key. Some documentation may also list commands, such as ^X, ^C, ^Z, etc., which means Ctrl+X, Ctrl+C, Ctrl+Z, etc. In other words, a user would want to press and hold the Ctrl or control key and then press the letter following the caret.

Below are example notations that represent pressing and holding down the Ctrl key and C key simultaneously. These notations are shorthand in documentation and may be shown on computer screens when the Ctrl key is pressed.