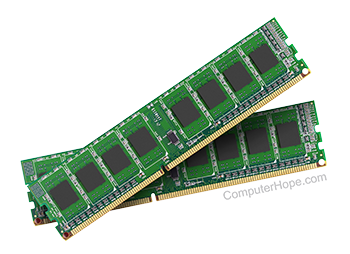 Computers use both non-volatile and volatile memory.

Are some types of memory faster than others?

Yes. Some memory devices are capable of storing and accessing information faster than others. When buying RAM, for example, you can easily compare different options by looking at the DDR (double data rate) version. DDR4 RAM is about two times faster than DDR3 RAM. For a more specific indicator, RAM has a megahertz (MHz) number next to it, indicating its exact speed; the higher the MHz, the faster the RAM speed.

While the capacity of RAM determines the amount of information your device can handle at one time, the speed at which the information is stored and accessed also varies between memory devices.

What happens to memory when the computer is turned off?

Memory is not disk storage 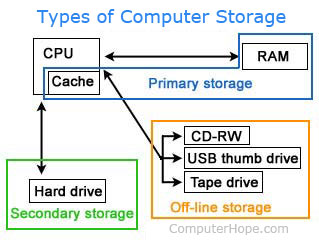 It is common for new computer users to be confused by what parts in the computer are memory. Although both the hard drive and RAM are memory, it's more appropriate to refer to RAM as "memory" or "primary memory" and a hard drive as "storage" or "secondary storage."

When someone asks how much memory is in your computer, it is often between 1 GB and 16 GB of RAM and several hundred gigabytes, or even a terabyte, of hard disk drive storage. In other words, you always have more hard drive space than RAM.

How is memory used?

When a program, such as your Internet browser, is open, it is loaded from your hard drive and placed into RAM. This process allows that program to communicate with the processor at higher speeds. Anything you save to your computer, such as pictures or videos, is sent to your hard drive for storage.

Why is memory important or needed for a computer?

Each device in a computer operates at different speeds, and computer memory gives your computer a place to access data quickly. If the CPU had to wait for a secondary storage device, like a hard disk drive, a computer would be much slower.

There are several types of memory for computers. They are listed below.

ROM is separated into three categories:

There are six types of RAM:

These types of memory fall into the general categories of SIMM or DIMM.