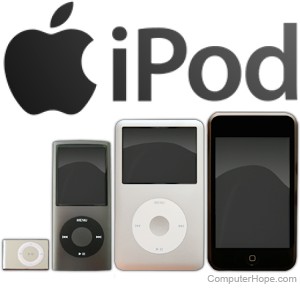 An iPod is a portable MP3 and media player developed by Apple and available for the Mac and PC that first began being sold on October 23, 2001. The iPod is capable of holding up to 10,000 songs, is easy to use, and is very portable. All these features and its great look is why it's such a popular device. Although not required, many iPod users use Apple iTunes to purchase and download songs. The image is an example of an early version of the Apple iPod.

On July 28, 2017, Apple announced it was discontinuing all iPod devices that are not running iOS. The iPod models marked as discontinued include the iPod Nano and iPod Shuffle.