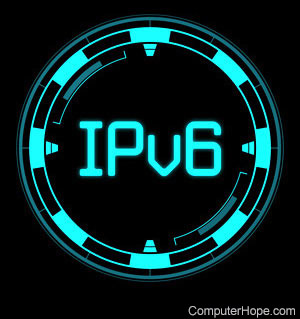 Sometimes called IPng (Internet Protocol next generation), IPv6 is short for Internet Protocol version 6. It is a network protocol for Internet and Ethernet network transmission, first introduced in 1996. IPv6 includes improvements over IPv4 such as a wider range of Internet addresses, improved routing and autoconfiguration, embedded encryption, and more. Not all operating systems and applications can utilize IPv6; however, new software is slowly making the transition. On June 6, 2012, Google and several thousand other companies migrated to IPv6. Since then, more companies have updated their services and products as well.

How many characters are there in an IPv6 address?

There are 18 characters in an IPv6 address, which allows it address is 128 bits instead of only 32 with IPv4.