Zero may refer to any of the following: 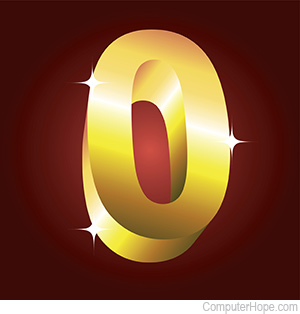 1. Zero is a numerical value represented as "0" that is equal to nothing and is not negative or positive. On a computer keyboard with a numeric keypad, there are two 0's. One zero in the top row of numbers and the other 0 on the keypad.

What symbol is on the 0 key?

On U.S. keyboards, the 0 key is on the same key has the close parenthesis.

3. The number 0 is also with the Command+0 and Ctrl+0 keyboard shortcuts.

4. With a regular expression, \0 is used to represent a null character.

5. The letter "O" is sometimes confused for the number zero (0). To help differentiate between an "o" and zero, a zero may have a dot or a forward slash. Showing the zero this way helps the reader quickly identify numbers from letters. For example, looking at the picture, you can quickly identify the zero in the "COMPUTER H0PE" text. However, in the font used here on the website, the "0" is not as easy to notice.

7. Zero is a chatbot developed by Computer Hope from 2003 to 2009. The chatbot was later used to help create Hopebot.