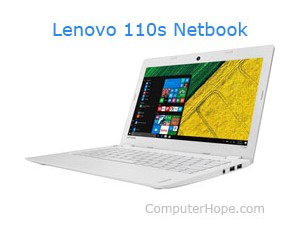 Sometimes referred to as a mini notebook, mini laptop, or subnotebook, netbook is a term coined by Intel. It describes a portable computer about half the size of a traditional laptop.

To reduce the cost of a netbook, they often come installed with a variant of Linux, use smaller screens, do not have a disc drive, and often use low capacity solid-state drives. The picture shows an example of a Netbook, the ASUS Eee PC. Netbooks are a great solution for users who want a computer for Internet access and basic applications, such as a word processor.

If you're having a tough time deciding between a netbook and a laptop, see: Laptop vs. netbook.

In 2013, Acer, ASUS, and others announced they have no intentions of making any new versions of netbooks, officially killing the netbook computer. If you are looking for a Netbook alternative and cheaper laptop, consider a Chromebook. If you're looking for a Windows computer that is portable and not a laptop, you may also want to consider a hybrid computer.