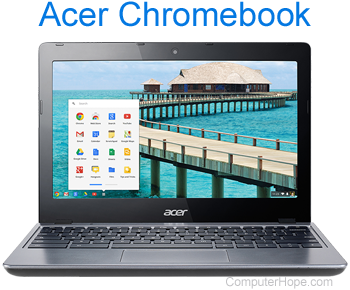 Initially released in 2011, a Google Chromebook is any laptop or netbook computer running the Google Chrome OS. Chromebooks are different from other laptops because they require the Internet (although their offline capabilities have improved) and run almost everything from the cloud. Their functionalities mainly include using the Google Chrome browser and related extensions, supported Android applications, and a file browsing system.

Chromebooks are designed for use with Internet and cloud-related software, featuring more basic hardware, and are generally not as powerful as a laptop with Windows or macOS. Typically, a Chromebook has a more low-end processor, like an Intel Celeron or Core M3 processor. Chromebooks often include only 2 to 4 GB of RAM and a 16 to 32 GB SSD for storage. They also feature basic integrated graphics and are not designed to play advanced video games. These low-end specifications make them more affordable than premium Windows or MacBook computers.

Chromebooks are manufactured and sold by various computer companies, including Acer, ASUS, Dell, HP, and Samsung. Google also sells a line of Chromebooks called the Pixelbook, more powerful Chromebooks that feature hardware similar to a Windows or macOS laptop.

Can I install Windows on a Chromebook?

With some Chromebooks, it could be possible to install Microsoft Windows. However, most Chromebooks have a small hard drive and memory that wouldn't be enough for Windows. For those Chromebooks that meet the requirements, you'd need to purchase a copy of Windows, which may require you to modify the motherboard and BIOS. These modifications require more advanced knowledge of computers and also void the Chromebook's warranty.