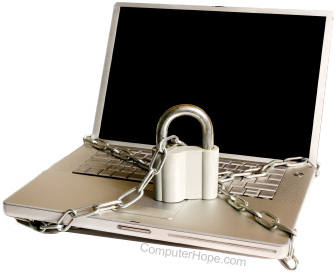 Ransomware is a malicious program that infects a computer and then locks or encrypts some parts, preventing users from accessing their computer or data. Commonly, after the ransomware is loaded on the user's computer, a message is displayed demanding payment to unlock it. Ransomware varies in its degree of difficulty to remove and how many areas are locked, ranging from a few files to the entire hard drive.

How to protect your computer from ransomware

There are several main ways to protect your computer from being infected with ransomware.

At least once a month, if not more often, create a backup of any important files. While backing up your files doesn't prevent ransomware, it does allow you to restore your files if your computer is infected with ransomware and files are encrypted. That is assuming the backup is also not corrupted.

How to remove ransomware from your computer

Depending on the level of infection on your computer and if you have an antivirus or anti-malware program installed, you can remove the ransomware. If you still have some access to your computer, follow the steps below.

If you do not have any access to your computer or cannot boot the computer to Safe Mode, you can try the following.

If the ransomware cannot be removed, or too many files are encrypted for the computer to be usable, restore the computer to factory settings. Restoring the computer erases all data and gets it back to working condition.

History of ransomware and notable attacks 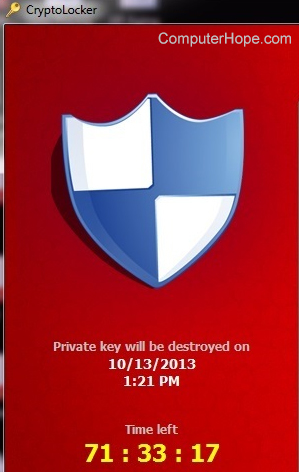 The first known ransomware attack was the AIDS Trojan in 1989. Created and initiated by Joseph Popp, the AIDS Trojan encrypted file names and hid those files in another location on the computer's hard drive. Victims were informed they needed to pay $189 to get the decryption key. Through analysis, the decryption key was included in the ransomware's code and could be extracted without paying the ransom.

In September 2013, the Cryptolocker ransomware was released and infected many computer systems globally. It mainly spread through e-mail attachments but also utilized the Gameover ZeuS botnet to infect some computers. The spread of Cryptolocker was stopped in May 2014, and was estimated that over $27 million was paid by victims as ransom, the largest ransomware total to date.

In May 2017, the WannaCry ransomware was released, utilizing the EternalBlue exploit, which reportedly was discovered by the NSA (National Security Agency) and subsequently leaked to the public. WannaCry infected over 230,000 computers across more than 150 countries and demanded $300 for each infected computer.

The SamSam ransomware was also released in May 2017 by Mohammad Mehdi Shah Mansouri and Faramarz Shahi Savandi. SamSam targeted JBoss servers at government and healthcare locations, using brute-force tactics to break weak passwords. About $6 million in total ransom money was paid, and an estimated $30 million in damages was realized from SamSam attacks.

In May 2021, the U.S. Colonial Pipeline company was a victim of ransomware, attacked by the DarkSide hacker group. The attack caused Colonial Pipeline to temporarily shut down their main oil pipeline, which supplies 45% of the fuel for U.S. East Coast states. DarkSide demanded a ransom of $4.4 million, which the company paid. However, the U.S. Department of Justice was able to recover $2.3 million of that ransom payment.