Ultraviolet may refer to either of the following: 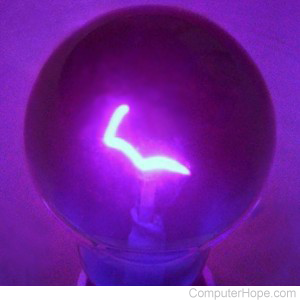 1. Commonly abbreviated as UV, the term ultraviolet refers to a wavelength of light that is too short to be seen with the human eye. This type of light has harmful effects on the human body, including skin cancer and permanent eye damage. While UV light was emitted in small amounts from old CRT monitors, it is not emitted by modern displays, which use LED technology.

2. Released on October 11, 2011 by DECE, UltraViolet was a DRM software for movies and television. Unlike Vudu or the Google Play Store, which allow users to purchase content digitally, UltraViolet allowed a library of physically purchased DVD and Blu-ray discs from the cloud.

On July 31, 2019, UltraViolet was shut down due to a lack of support from movie production companies, which previously worked with the platform to make their content available.