When and who invented the first computer mouse?

The computer mouse was invented and developed by Douglas Engelbart, with the assistance of Bill English, during the 1960s and was patented on November 17, 1970.

While creating the mouse, Douglas was working at the Stanford Research Institute in Menlo Park, California, a think tank sponsored by Stanford University. The mouse was originally referred to as an "X-Y Position Indicator for a Display System" and was first used with the Xerox Alto computer system in 1973. Using the mouse, Douglas was able to demonstrate moving a mouse cursor on the Alto computer in The Mother of All Demos. However, because of its lack of success, the first widely used mouse is the mouse found on the Apple Lisa computer. 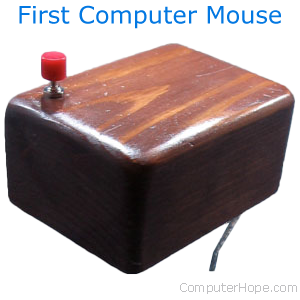 The picture shown here was taken by Maracin Wichary at the New Mexico Museum of Natural History and Science and is an example of the first computer mouse. As shown, the mouse was made of wood, was much larger than today's mouse, rectangular in size, and only had one small button in the top-right corner.

Today, the mouse is still used on every desktop computer and has influenced other input devices like the touchpad on a laptop computer and touch screens on smartphones and tablets.

Why is the computer mouse called a mouse?

With the cord coming out of the back of the mouse Douglas said the device reminded him of the rodent mouse and the name stuck. It's a lot easier to remember than a X-Y Position Indicator for a Display System.