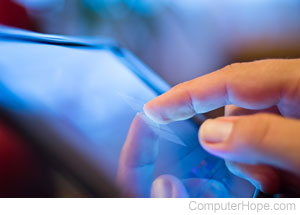 A touch screen is a display device that allows users to interact with a computer using their finger or stylus. They're a useful alternative to a mouse or keyboard for navigating a GUI (graphical user interface). Touch screens are used on various devices, such as computer and laptop displays, smartphones, tablets, cash registers, and information kiosks. Some touch screens use a grid of infrared beams to sense the presence of a finger instead of utilizing touch-sensitive input.

The idea of a touch screen was first described and published by E.A. Johnson in 1965. In the early 1970s, CERN engineers Frank Beck and Bent Stumpe developed the first touch screen. The physical product was first created and utilized in 1973. The first resistive touch screen was developed by George Samuel Hurst in 1975 but wasn't produced and used until 1982.

What computers support a touch screen?

To help keep costs lower, not all computers and laptops come with a touch screen. If a touch screen interests you, make sure that it's mentioned in the product specifications. If it's not listed, the computer likely does not have a touch screen.

How do I make my computer screen a touch screen?

If your desktop computer monitor is not touch-capable, there is no way to change the monitor to be a touch screen. You need to purchase a new monitor that includes touch functionality. Before purchasing a new monitor, verify the operating system on your computer also supports a touch screen.

Mac computers and the macOS currently do not have or support a touch screen.

How do you use the touch screen?

Not all touch screens have the same functions, but the actions below are the most common.

Tap - A single touch or tap on the screen with a finger opens an app or selects an object. Compared to a traditional computer, a tap is the same as clicking with a mouse.

Double-tap - A double-tap can have different functions depending on where it is utilized. For example, double-tapping the screen zooms the view centered at the tap location in a browser. Double-tapping in a text editor selects a word or section of words.

Touch and hold - Pressing and holding your finger to a touch screen selects or highlights an object. For example, you could touch and hold an icon and drag it somewhere else on the screen. See our long press page for further information on this term.

Drag - Pressing and holding your finger on a movable object, such as an icon, you can drag your finger to "pull" the object to a different location. The same action, used with text, lets you highlight text. Lift your finger when you are done moving or highlighting.

Pinch - Placing two fingers on the screen in different spots and then pinching them together zooms in. Pinching your fingers together and then moving them away from each other zooms out on the screen. See our pinch-to-zoom page for further information on this term.

Why is a touch screen an input device?

Any computer device (including a touch screen) that takes input from the person operating the device is considered an input device. The way you use your finger on a touch screen is very similar to how you use a computer mouse on a desktop computer.

Technically speaking, a touch screen is an input/output device. Not only is it capable of accepting input, but it also displays the output from the computer.

How is a touch screen different than a mouse?

A computer mouse and touch screen have many similarities. Many of them are mentioned in the how do you use the touch screen section above.

One of the most significant differences between a mouse and a touch screen is the ability to hover. Almost all touch screens can only detect input when your finger is in direct contact with the screen. However, a computer mouse uses a cursor that allows the user to view the information by moving the pointer over an object but not clicking it. For example, this link to Computer Hope shows the text "Visit the Computer Hope Page" when hovered over using a computer mouse. However, a user with a touch screen cannot see this text because it opens the link if they place their finger on the link.

Some web pages and apps may simulate the hover feature by making the first tap do the hover feature and the second tap open the link or app. Also, some Apple devices use Force Touch, which offers features similar to hovering.

Where are touch screens used?

Today, the touch screen is one of the most popular types of input devices. Below are some places and examples of where touch screens may be used.

Why are touch screens used?

Below are the reasons a manufacturer may decide to use a touch screen instead of another input method, such as physical buttons.

Not all touch screens are the same. Different technologies are used to allow a user to interact with a screen. Some technologies may work with only your finger, while others may allow other tools, like a stylus. Below is a brief description of each of these technologies.

To use a capacitive screen, you must use your bare finger or a specially designed capacitive stylus. Most users experience this type of screen technology when attempting to use a smartphone touch screen while wearing gloves and cannot do anything.

There are specially designed gloves that allow one or more fingers to interact with a capacitive screen.

A resistive touch screen is coated with a metallic electrically conductive and resistive layer that detects the pressure of your finger or another object. This technology is often a more affordable solution than capacitive but can be damaged by sharp objects touching the screen.

A SAW (surface acoustic wave) or surface wave touch screen sends ultrasonic waves and detects when the screen is touched by registering changes in the waves. This technology is more advanced than the other two but does not work with hard materials and can be affected by outside elements.

Infrared touch screens utilize a matrix of infrared beams transmitted by LEDs with a phototransistor receiving end. The infrared beam is blocked when a finger or other object is near the display. That interruption gives the device input to where your finger or another object is positioned.

Do touch screens have a keyboard?

Touch screens utilize a virtual keyboard to input letters and numbers that allow the user to tap the virtual keys with their finger. Also, devices like smartphones and tablets have voice recognition that inputs information into the device.

Is it "touch screen," "touchscreen," or "touch-screen"?

In all forms of writing, touch screen and touchscreen are both valid spellings. If used as an adjective, the word may be hyphenated, e.g., "touch-screen devices."