What is the difference between an input and output device? 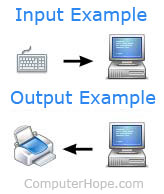 Most devices are only input devices or output devices, as they can only accept data input from a user or output data generated by a computer. However, some devices can accept input and display output, and they are referred to as I/O devices (input/output devices).

For example, as shown in the top half of the image, a keyboard sends electrical signals, which are received as input. Those signals are then interpreted by the computer and displayed, or output, on the monitor as text or images. In the lower half of the image, the computer sends, or outputs, data to a printer. Then, that data is printed onto a piece of paper, which is also considered output.

For additional information and examples, see our input device page.

For additional information and examples, see our output device page.

For additional information and examples, see our input/output page.