A speaker may refer to any of the following: 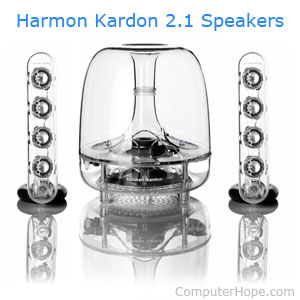 1. A speaker is a term used to describe the user who is giving vocal commands to a software program.

2. A computer speaker is an output hardware device that connects to a computer to generate sound. The signal used to produce the sound that comes from a computer speaker is created by the computer's sound card. The picture shows the Harman Kardon Soundsticks III 2.1 Channel Multimedia Speaker System.

How do speakers work?

Speakers are made up of a cone, an iron coil, a magnet, and housing (case). When the speaker receives electrical input from a device, it sends the current through the causing it to move back and forth. This motion then vibrates the outer cone, generating sound waves picked up by our ears.

Evolution of the computer speaker

When computers were initially released, they had onboard speakers built into the chassis that generated different tones and beeps. The first internal computer speaker was invented by IBM in 1981 and produced basic, low quality sound.

As technology progressed, onboard speakers moved into the computer monitor and acquired the ability to produce voices, music, and other sound effects. Monitor speakers were on the bottom-left and bottom-right on the front of the monitor. However, some monitors had speakers built into the left and right side of the monitor.

When computer gaming, digital music, and other media became popular, manufacturers began to make external speakers that produced higher quality sounds and improved bass. The first external computer speaker was invented by Abinawan Puracchidas in 1991 and are still the dominant type of speaker for computers.

Why do we need computer speakers?

3. With a computer motherboard, a speaker refers to the Internal speaker.