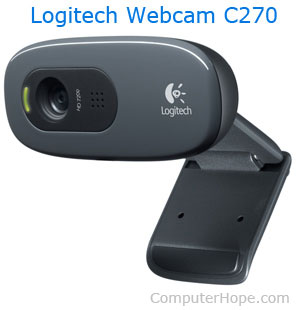 A webcam is a camera that connects to a computer. It captures either still pictures or motion video, and with the aid of software, can transmit its video on the Internet in real-time. The picture is of a Logitech Webcam C270, an example of a webcam.

Today, most webcams are either embedded into the display with laptop computers or connected to the USB or FireWire port on the computer.

Unlike a digital camera and digital camcorder, a webcam does not have any built-in storage. Instead, it is always connected to a computer and uses the computer hard drive as its storage.

Earthcam and YouTube are examples of where you can find and participate in live webcams.

The first widely-publicized webcam was the XCoffee, also known as the Trojan Room coffee pot. The camera began operating in 1991 with the help of Quentin Stafford-Fraser and Paul Jardetzky. The camera was then connected to the Internet in November 1993 with the help of Daniel Gordon and Martyn Johnson.

The XCoffee webcam monitored a coffee pot outside the Trojan Room in the University of Cambridge, so people didn't waste time going down to get coffee if none was brewed. After being mentioned in the news, the website had over 150,000 people online watching the coffee pot. The webcam went offline on August 22, 2001. The picture is an example of how the XCoffee appeared online.