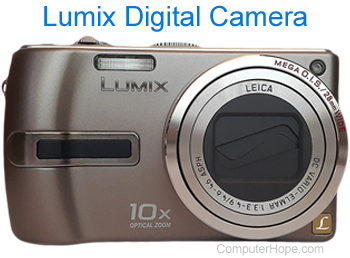 A digital camera is a hardware device that takes photographs and stores the image as data on a memory card. Unlike an analog camera, which exposes film chemicals to light, a digital camera uses digital optical components to register the intensity and color of light, and converts it into pixel data. Many digital cameras are capable of recording video in addition to taking photos. The picture is of a Lumix digital camera from Panasonic.

A camera that is always connected to your computer with no storage could also be referred to as a digital camera. However, it is more appropriate to refer to this device as a webcam.

A digital camera may be considered both an input and output device (I/O device) as it can both take pictures (input) and send them to your computer (output).

What are the advantages of using a digital camera?

Below are key advantages that make digital cameras a popular choice compared to film cameras.

The rear-mounted LCD screen on a digital camera allows users to see their photos and videos immediately after they are taken. The LCD screen can also make it easier to frame your pictures.

A digital camera can store thousands of pictures, instead of only up to 36 pictures.

Digital camera pictures can be developed like a standard film camera, but you can pick which pictures to develop instead of developing the whole roll of film.

Because a digital camera does not need a place for film (not an SLR), it takes up far less space and can easily be carried in your pocket or purse.

Some digital cameras, like a digital SLR camera, allow users to adjust lighting, aperture, shutter speed, and other settings, providing improved control over picture quality. These digital cameras also allow for accessory attachments to increase or decrease the size of a lens and length of zoom.

History of the digital camera

Digital cameras did not become common consumer electronic devices until the mid-1990s. By the mid-2000s, digital cameras mostly replaced film cameras as the camera of choice by consumers.