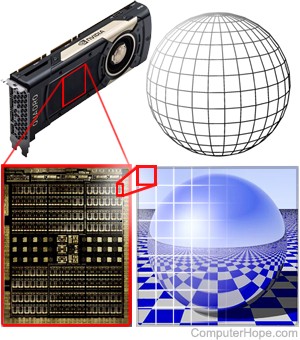 A computing task is embarrassingly parallel (also called pleasingly parallel or perfectly parallel) if it can naturally divide into individual parallel processing tasks. Many image processing tasks, such as raytracing and raycasting of 3D images, are embarrassingly parallel. In these tasks, sections of the image can be computed separately, without interacting with the others. These individual "chunks" of the image can be assigned to independent processors, such as the CUDA cores on an NVIDIA GPU. Each core can process its chunk simultaneously, greatly speeding up the process. When parallel processing is complete, the chunks are joined to create the final rendered image.

Pictured at right is an illustration of an NVIDIA GPU equipped with multiple CUDA cores, each processing part of a raytraced image in parallel.

In addition to 3D image rendering, other embarrassingly parallel tasks include: