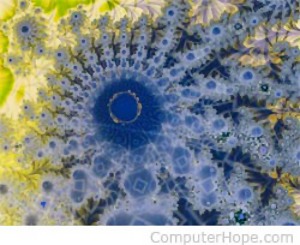 Fractals are self-similar geometric figures where a pattern of shapes is repeated infinitely.

The word "fractal" is short for "fractional dimensional." The dimensional number of a fractal is not an integer, but a fraction greater than the number of dimensions where it is projected. For example, a fractal might be viewed in two-dimensional space, but the actual geometric dimensions would be a fraction between 2 and 3, due to its infinite complexity.

What are fractals used for?

Fractals are useful for creating mathematical models of real-world objects that are self-similar, such as snowflakes or coastlines on a map. These objects are difficult to measure by traditional methods because their boundaries become more complex the closer you look at them. 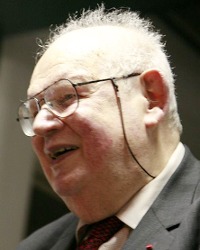 Fractal geometry was first defined by French mathematician Benoît Mandelbrot in 1975. Mandelbrot described himself as a "fractalist," and said that fractals represent "the uncontrolled element in life." The first fractal ever calculated, the Mandelbrot set, is named in his honor.

How are they calculated?

The Julia set is named after French mathematician Gaston Julia, who studied complex dynamics. The values of the Julia set form a repeating pattern of infinite complexity.

Below is an interactive, procedurally-generated Julia set. You can click-and-drag on the image to change its position, or scroll over the image with your mouse wheel to zoom. If you zoom in, you'll see that the pattern repeats over and over, forever.

The fractal above is created with JavaScript. It is a modified version of the open-source program Zoomable Julia Set, published by GitHub user syntagmatic.