Zoom may refer to any of the following: 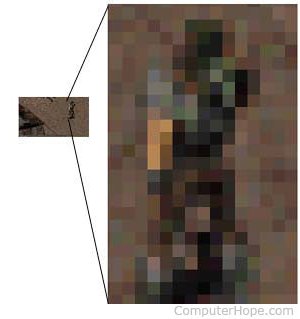 1. When referring to an image, graphic, or document, zoom describes the function of focusing on a section of an image and increasing its overall size for greater detail. Zoom can also refer to magnifying the image on a screen. The image at right is zoomed in 1600% of its original size.

As seen in the image, as you zoom into an image each pixel grows in size and makes the image appear pixelated or jaggy. Unfortunately, unlike in the movies, you cannot "enhance" the image to make a zoomed image clearer.

Many graphics programs (e.g., Adobe Photoshop), and Internet browsers (e.g., Google Chrome), support the keyboard shortcut key "Ctrl+minus key" to zoom out and "Ctrl+plus key" to zoom in on a picture or web page. Also, Ctrl+0 (the number zero) resets the zoom to the default zoom level if you zoomed in too far.

2. Zoom is a shortened version of the Zoom Video Communications company who specializes in easy to use teleconferencing and chat software. Their Zoom teleconferencing system and software allows users to conduct conference calls over the Internet, and use webcams to see others on the calls.

3. When referring to a window in a GUI (graphics user interface), zoom is another name for maximize. On Apple computers, the box on a window title bar to increase the size of a window is called a zoom box.

4. Alternatively referred to as optical zoom, zoom is a camera and digital camera feature that uses optics in the lens to enlarge an object without having to move closer. A digital camera may also include a digital zoom, which uses digital technology to get closer to an object beyond the capabilities of the camera lens.

5. When referring to a telecomunications company, Zoom Telephonics company is a manufacturer of computer products that link people and their personal computers to each other.