Originally known as BackRub. Google is a search engine that started development in 1996 by Sergey Brin and Larry Page as a research project at Stanford University to find files on the Internet. Larry and Sergey later decided the name of their search engine needed to change and chose Google, which is inspired from the term googol. The company is headquartered in Mountain View, California.

The domain google.com was registered on September 15, 1997, and the company incorporated on September 4, 1998. The picture below is a capture of the site from The Internet Archive of what Google looked like in 1998. 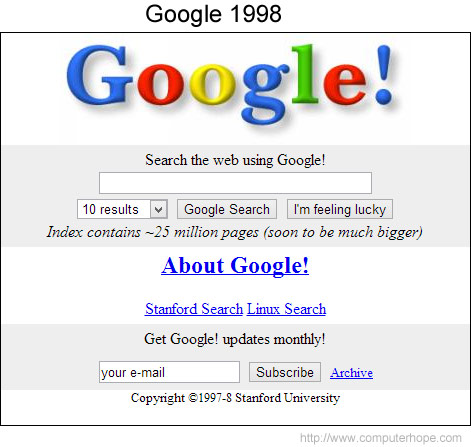 What helps Google stand out from its competition, helps it continue to grow, and be the number one search engine is its PageRank technique that sorts search results. While being one of the best search engines on the Internet, Google also incorporates many of its other services, like Google Maps and Google Local, to provide more relevant search results.

How to open Google

To open Google, click this link: google.com, or in your web browser address bar, type "google.com" and press Enter.

Once the Google website is open, in the search box, type a word or phrase, and press Enter or click the Google Search button. If done successfully, you'll be given search results.

Other Google products and services

We also suggest you visit our Google tips page for additional tips on using all Google services.

What is a Googler?

When referring to an employee, a Googler is a Google employee. When talking about a user, a Googler refers to someone who uses the Google search engine frequently.

Google also has several well-known hidden Easter eggs throughout its services. Below is a list of these hidden gems.

Below is a listing of many discontinued Google services that are no longer supported, deprecated, merged into other products, or sold off to other companies.

See the Killed by Google site for a full list of all products in the Google graveyard that were killed.