A mount may refer to any of the following:

When mounting a disk, the operating system reads information about the file system from the disk's partition table, and assigns the disk a mount point. The mount point is a name that refers to the disk, like "C:" in Microsoft Windows, or "/" in Linux, BSD, macOS, and other Unix-like operating systems.

For instance, in Microsoft Windows, mountable file systems are called volumes. Mounted volumes are listed in File Explorer in the section named "This PC" (in Windows 10) or "My Computer" (in earlier versions of Windows). Every mounted volume is assigned a drive letter.

Windows and macOS, by default, automatically mount every disk that is attached to the computer. For instance, when you insert a USB flash drive, the OS detects the new storage media, attempts to mount it, and if it can, it does. Other operating systems, such as Linux, require you to explicitly configure mount points (in the file system table file, /etc/fstab), or mount the disk manually with the mount command.

3. With an Apple Macintosh, mounting describes when a disc is placed into a machine. 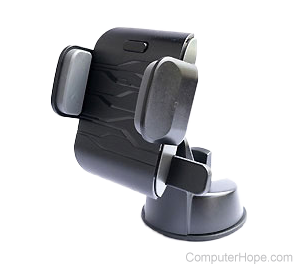 4. When referring to hardware, a mount may refer to a mechanism that helps hold a device, such as a hard drive, in a computer. See the anti-vibration mount definition for further information about this term.

5. Mount may refer to a group of files in a file system accessible to a user or group of users.