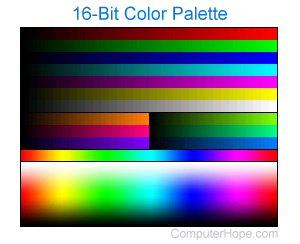 16-bit is a computer hardware device or software program capable of transferring 16 bits of data at a time. For example, early computer processors (e.g., 8088 and 80286) were 16-bit processors, meaning they were capable of working with 16-bit binary numbers (decimal number up to 65,535). Anything larger and the computer would need to break the number into smaller pieces.

Today, 16-bit hardware and software has been replaced by 32-bit and 64-bit alternatives, which give the computer more memory to work with, increasing overall performance.

When referring to a computer video card or graphics card, 16-bit color or high color refers to the amount of colors capable of being displayed. For example, 16-bit is the same as 65,536 colors.