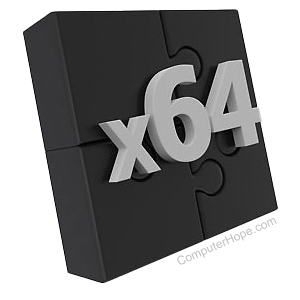 More specifically, 64 bits is the size of the registers on a 64-bit CPU's microprocessor or the computer bus.

64-bit hardware, and the software compiled to run on it, is sometimes called x86-64. This name refers to the fact that it is a 64-bit architecture, and is compatible with Intel's x86 instruction set. These instruction sets may also be called AMD64, as a reference to the AMD64 instruction set designed by AMD in the 2000.

Below are examples of 64-bit computer processors.

There are many operating systems capable of running on 64-bit architecture, including Windows XP, Windows Vista, Windows 7, Windows 8, and Windows 10. However, 64-bit versions of Windows XP and Vista were far less common when they were popular.

Can you install 32-bit programs on a 64-bit operating system?