32-bit may refer to any of the following: 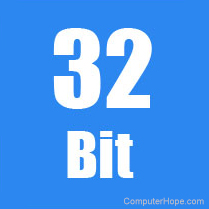 1.32-bit is a type of CPU architecture that transfers 32 bits of data per clock cycle. More plainly, it's the amount of information your CPU can process each time it performs an operation. You can think this architecture as a road that's 32 lanes wide; only 32 "vehicles" (bits of data) can go through an intersection at a time.

In more technical terms, this means processors can work with 32-bit binary numbers (decimal number up to 4,294,967,295). Anything larger and the computer would need to break the data into smaller pieces.