A scanner may refer to any of the following: 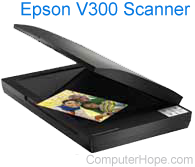 1. When referring to hardware, a scanner, image scanner, or optical scanner is a hardware input device that optically "reads" an image and converts it to a digital signal. For example, a scanner may convert a printed picture, drawing, or document (hard copy) to a digital file that can be edited on a computer. The picture shows an example of a flatbed scanner, the Epson V300.

How is a scanner connected?

Other types of computer scanners

There are also other types of scanners that can be used with a computer.

A handheld scanner should not be confused with a barcode reader.

When was the first scanner created?

The earliest forms of scanners appeared in the 1860s. However, the scanner as we know it today was created in 1957 by Russell Kirsch at the United States National Bureau of Standards. The first image scanned by this device was a picture of Kirsch's son. This black and white image measured only 5x5 cm and had a resolution of 176 x 176 pixels.

Why is a scanner an input device?

A computer scanner is a digitizer, a type of input device. It takes real-world objects (e.g., a document or picture) and converts them to digital information for a computer to store or manipulate. A scanner only sends information to the computer and cannot receive information from the computer like a printer (which is an output device).

2. When referring to software, a scanner may refer to any program that scans computer files for errors or other problems. An example is an antivirus program, which scans the files on the computer for viruses or other malware.

3. In general, a hardware scanner can be any device that reads a signal, text, or symbol. In addition to the image scanner mentioned earlier, the following is a list of other types of hardware scanners.