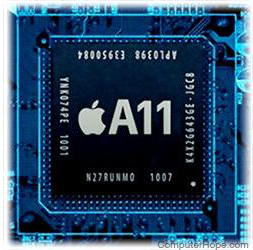 Secure Enclave is a hardware component of modern Apple mobile devices, such as the iPhone. It is a coprocessor of the device's ARM CPU, in models S2, A7, and later A-series processors. It provides all cryptographic operations for authenticating the user and is designed to be secure even if the iOS kernel is hacked.

Secure Enclave was developed in conjunction with Apple's Touch ID technology, which can identify a user by his or her fingerprint. They were introduced together on September 10, 2013, as part of Apple's announcement of the iPhone 5s, the first device to feature Touch ID.

On September 12, 2017, Apple announced that Face ID, its new biometric authentication technology featured in the iPhone X, replaces Touch ID on newer devices. On the iPhone X, Face ID stores and processes all biometric data in the Secure Enclave of its ARM A11 CPU.