Alternatively referred to as an audio output device, sound board, or audio card. A sound card is an expansion card or IC for producing sound on a computer that can be heard through speakers or headphones. Although the computer doesn't need a sound card, it's included on every machine as either in an expansion slot (shown below) or built into the motherboard (onboard). 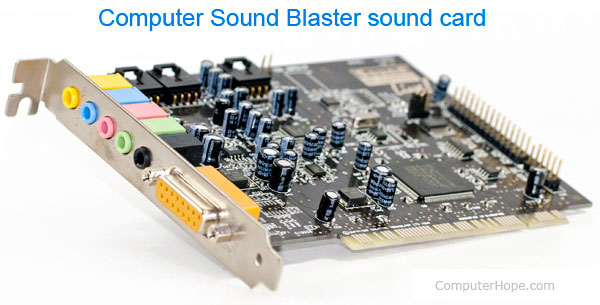 The picture is an example of a sound card audio ports or audio jacks on the back of your computer, associated colors, and the connector symbols. In this example, the five audio jacks are used with devices that use the 3.5 mm mini plug.

Usually, the cables connecting to the devices are also color-coded, and will match or be close to the colors the cables connect to. For example, the end of the speakers cable may have a green line or be completely green.

Uses of a computer sound card

Below are all of the different areas of a computer a sound card can be used.

History of the sound card

The first sound card is considered to be the Gooch Synthetic Woodwind, used by PLATO terminals. It was invented by Sherwin Gooch in 1972, and was a synthesizer capable of 4-voice music synthesis.

AdLib was one of the first companies to manufacture sound cards for the IBM PC. AdLib developed the Music Synthesizer Card in 1987, basing it on the Yamaha YM3812 sound chip.