A store may refer to any of the following: 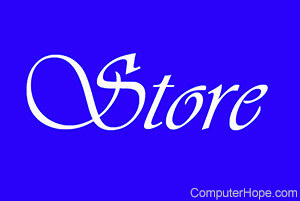 1. As a verb, store or storing is the action of saving information for later use. With computers, you store information on a storage device, such as an internal hard drive, optical disc drive, or an external storage device.

In the case of a magnetic storage medium, information is stored by polarizing sections of magnetic disk platters to represent the binary values 1 and 0.

The OS (operating system) of the computer is responsible for storing data on your computer. When you save data on a computer, the operating system stores it in units called files, in an organizational structure called a file system.

2. When referring to a location, a store is a place where something can be purchased. For example, a computer store sells computers, software, and hardware.

3. An app store is a marketplace on the Internet where you can purchase apps for your desktop computer or mobile device.