Undo is a function performed to reverse the action of an earlier action. For example, the undo function can undo deleted text in a word processor. Some software programs may also have the capability of performing multiple undo actions. 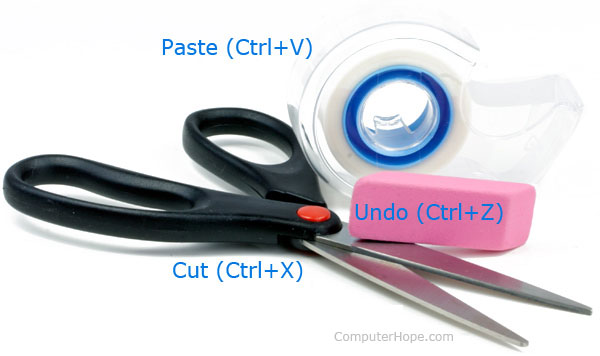 The image above shows how the undo function is similar to an eraser in the real world. Like an eraser, if you were to write or draw something and made a mistake, you could erase (undo) the mistake.

If you make changes and then close the document or program, any changes that were made earlier cannot be undone.

In some programs, you can also undo actions that are not related to text. For example, in most Internet browsers, you can press Ctrl+Shift+T to undo any browser tab you close. Pressing it more than once lets you undo more than one closed tabs.

What is the keyboard shortcut for undo?

Below is a listing of keyboard shortcuts for how you can undo on different operating systems.

The shortcut key to redo an undo is usually Ctrl+Y (or Command+Y on a Mac).

Practice an undo by highlighting some or all of the below text and pressing Ctrl+X to cut the text. Once the text is cut, press Ctrl+Z to undo. Apple computer users should substitute "Ctrl" for "Cmd" (Command).

How many undo actions can be performed?

The number of times you can undo depends on the program you are using. Many programs only allow between one and five undo actions, where other programs can allow several undo actions by repeating the steps to undo.

For example, in Photoshop, after performing multiple actions or tasks, the undo feature undoes the most recent (last) activity first and continues in reverse order. In other words, if you cut a portion of an image, pasted it, and then moved it to another place on the image. Doing undo multiple times would first undo the move, then undo the paste, and then undo the cut.

If the program or online service you are using does not support multiple undo actions, there's nothing you can change. It is up to the developer to add or modify the undo feature.

How to undo on a phone

On Apple iPhones, you can physically shake your phone to activate the undo feature in a text program. Newer versions of iOS also allow you to double-tap with three fingers to undo. Unfortunately, without installing an app on Android phones, there is no way to undo on an Android phone. You can install the Inputting+ app to give your apps the ability to undo.

Where is the undo button? 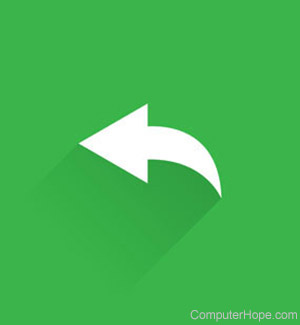 Although we recommend users use the undo keyboard shortcut, programs that support undo also have an undo button or option in the file menu. The button location varies but is often an icon of an arrow pointing back and in the edit portion of the menu or Ribbon. Some versions of Microsoft Office programs like Microsoft Word 2010 have the undo button in the title bar.

To use the undo button, click it with the left mouse button, or tap the button with your finger on a touch screen. For example, if you accidentally deleted a cells data in Microsoft Excel, clicking the undo button would undo the mistake and restore the deleted data.

In Microsoft Office programs like Microsoft Word and some other programs, the undo button may also have a down arrow next to the button. Clicking the down arrow shows you all available undo actions, and moving the mouse down the list lets you perform multiple undo actions at the same time.

What are the advantages in using undo?

To error is human, and as you work on a computer you're going to make a mistakes. Using undo lets you quickly fix those mistakes. For example, if you had a paragraph of text highlighted and mistakenly pressed delete, undo lets you fix the mistake without re-typing the text.

What is the difference between undo and redo?

The redo feature is something made available once you've performed an undo. Redo restores any actions that were previously undone using an undo. For example, if you thought you mistakenly deleted text and performed an undo to restore the text, but then realize it was something you wanted, redo would delete the text again.

How can I undo a save?

If you've saved changes but have not closed the document, spreadsheet, or file, use the undo shortcut or steps mentioned above to undo saved changes. However, you cannot use the undo feature if you've closed the file or program after saving your changes. To restore an older version of a file, you must be using a program that maintains a version history. For example, in Google Docs and recent versions of Microsoft Office programs like Word and Excel, there are saved versions to restore older versions. If the program you're using does not keep a version history, and you're not using a CVS (Concurrent Version System), the only other way to undo a save would be to restore a backup. If none of these options are available, there are no other solutions to restore or undo information due to a save.