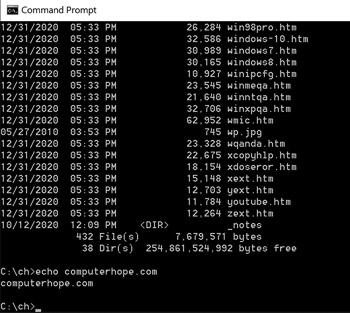 The command line, also called the Windows command line, command screen, or text interface, is a user interface that's navigated by typing commands at prompts, instead of using a mouse. For example, the Windows folder in a Windows command line is "C:\Windows>" (as shown in the picture). In Unix or Linux, it may be "%" or ">" depending on the shell. Unlike a GUI (graphical user interface) operating system, a command line only uses a keyboard to navigate by entering commands and does not utilize a mouse for navigating.

Why do people use the command line?

Although using a command line interface requires the memorization of many different commands, it can be valuable resource and should not be ignored. Using a command line, you can perform almost all the same tasks that can be done with a GUI. However, many tasks can be performed quicker and can be easier to automate and do remotely.

Example of doing a task in the command line

Move all .txt files to a backup directory in a Windows command line

Move all .txt files to a backup folder in a Windows

For a comparison to the above command line steps. Below are the steps on how to perform the same action (moving .txt files) in Windows.

As demonstrated in the two examples above, performing the same task in a command line does require learning at least three commands. However, once these commands are known, it requires less steps in a command line than in Windows. These same commands could also be used in a batch file or other scripting language to automate the process. For example, you could automate backing up files by copying the files instead of moving them. Once the commands are written in a batch file, double-click the batch file to perform all the copying.

There are hundreds of different commands that can be used in a command line. Remembering all the commands, syntax, and options of every command would be impossible, which is why we've created the below pages. Below are links to our Windows command line, MS-DOS, Linux, and Unix command listings. Each of these pages has hundreds of commands with full syntax and examples of how to use each command.

Text interface with menus in a command line

A text interface can be made easier to navigate using menus created with text and ASCII extended characters. For example, many command line text editors use an interface with menus and shortcut keys that make navigating the file being edited easier. The picture below is an example of the MS-DOS editor used to edit files while at the MS-DOS or Windows command line. 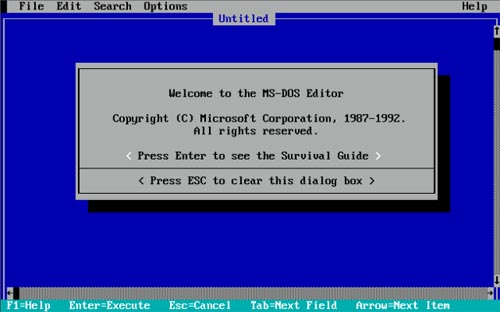 Should I learn a command line?

We're strong believers you should learn as much as you can about computers to make using a computer easier. Having a basic understanding of the command line from reading this page gives you a much greater advantage than someone unfamiliar with its capabilities. Below are some reasons you may want to learn even more about the command line.

Should I use "command line" or "command-line" in my writing?

Both "command line" and "command-line" are acceptable and widely used in today's writing. When used as an adjective before a noun, use "command-line" (with a hyphen) in your writing to help prevent confusion. For example, in the sentence "Make sure you entered the correct command-line parameter." the word "command-line" is describing a type of parameter.