C may refer to any of the following:

1. C is commonly used to describe the C: drive or the first hard drive on IBM compatible computers. 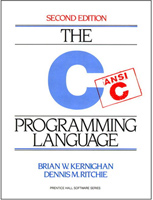 2. The C programming language is a programming language developed by Dennis Ritchie and Brian Kernighan at Bell Labs in 1972 from an almost unknown language named B. The first major software written in C was the Unix operating system, and for many years, C was considered to be inextricably linked with Unix. Pictured is The C Programming Language book by Kernighan and Ritchie that's also sometimes referred to as the bible in the computer field.

Below is an example of a C program that prints "Hello World!" after it's been compiled. If you need a free C compiler, consider GCC.

3. With measurements, C is an abbreviation for Celsius. As a scientific unit C is short for coulomb.

4. The C button on calculators is short for "clear" and is a button used to clear all last numbers and totals. Calculators that have this key may also have a CE button that is used to only clear the last entered number. For example, if several numbers are entered before the number you're entering now, you can press the CE button only to clear the current number without deleting any prior numbers. If you wanted to clear everything, you could press the C button instead.

5. C is a key used with the keyboard shortcuts Alt+C, Command+C, and Ctrl+C.

6. Shorthand and chat slang for see or sea. For example, someone may say "ICU" in chat as a short method of typing "I see you."

7. With Microsoft Excel and other spreadsheet programs, "C" is the third column of a spreadsheet. To reference the first cell in the column, you'd use "C1."

8. In the phonetic alphabet, "C" is often pronounced as "Charlie."

9. C is the third letter in the English alphabet. The letter "C" comes after "B" and is followed by the letter "D." To create a capitalized "C" press Shift and C at the same time.

On a U.S. QWERTY keyboard, the "C" key is on the bottom row, to the right of "X" and left of the "V" key. See our keyboard page for a visual example of all keyboard keys.

If the "C" key is not working on the keyboard, see: Some of the keys on my computer keyboard aren't working.