Some of the keys on my computer keyboard aren't working 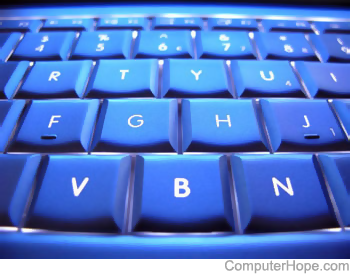 When the keys on a keyboard don't work, it's usually due to mechanical failure. If this is the case, the keyboard needs to be replaced. However, sometimes non-functioning keys can be fixed. The following sections contain common issues and their causes, with methods to try and repair those problems.

The steps on this page are for those whose keyboards still have some keys that work. For example, only a few of the letters, numbers, or other characters not working. We have a separate page for troubleshooting keyboards that have no working keys. See: Why don't any keys on my keyboard work?

One or more keys do not work

Dust, dirt, hair, and other debris can fall into the keyboard over time and obstruct a key's movement or interfere with its circuitry. Try removing the key that isn't working, and clean the area under and around it.

You can also try blowing away any debris in the spaces between the keys using a can of compressed air or an air compressor.

Function keys are not working 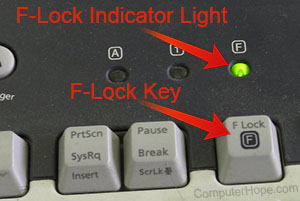 If the function keys are not working, the problem may be you have a function lock or F-Lock key that needs to be toggled. The F-Lock key is used to turn on or off the F keys (F1 through F12) or secondary functions of the F keys.

Some keyboards may label the F-Lock key as the Fn key.

Keys on the number pad are not working

If the keys on the number pad don't work or are behaving oddly (e.g., moving your cursor), press the Num Lock key. Num Lock is used to switch between the primary function (numbers) and secondary functions (arrow keys, Home, Delete, etc.) of the numeric keypad.

If your keyboard has an LED indicator for the Num Lock key, the light should be turned on when the numbers can be typed.

Some keys, such as the function keys (F1 through F12), do not work with every application. Test the key that isn't working in more than one program, such as Notepad, a word processor, and your preferred Internet browser. If the key works in other programs, then that key does not have any functionality in that specific program.

Try rebooting your computer. It's not uncommon for a program or operating system to cause problems with a keyboard that prevents some of the keys from working.

If rebooting didn't help and you're using Windows, try starting the computer in Safe Mode to make sure no background programs are running. If your keyboard works in Safe Mode, it's likely that one of the installed programs or device drivers is causing the problem.

You can try disabling or removing background programs, or TSRs, to see which one may be causing some keys not to work.

We also recommend checking if there are any updated device drivers for your computer. Installing updated drivers may fix issues related to driver conflicts causing some keys not to work.

Key not doing expected action in a game

If you're having problems with a key working in a game, make sure the key is properly mapped. Each key can be mapped to a different action through the game keyboard settings.

Keyboard still does not work

If you've tried all the suggestions above and one or more keys are still not working, the keyboard is defective and needs to be replaced.