A modem may refer to any of the following: 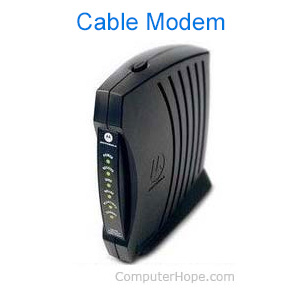 1. A modem or broadband modem is a hardware device that connects a computer or router to a broadband network. For example, a cable modem and DSL modem are two examples of these types of Modems.

Today, a "modem" is most often used to describe a broadband modem. However, it also describes what was initially considered a modem (described below) to connect to the Internet. To help prevent confusion, use the terms "broadband modem" and "dial-up modem."

A broadband modem is an external device that connects to your computers and other network devices using either a network cable or over a wireless connection.

2. Short for modulator/demodulator, a modem is a hardware device that allows a computer to send and receive information over telephone lines. When sending a signal, the device converts ("modulates") digital data to an analog audio signal, and transmits it over a telephone line. Similarly, when an analog signal is received, the modem converts it back ("demodulates" it) to a digital signal.

To help prevent confusion between a broadband modem, you can refer to this modem as a dial-up modem.

The picture below is an example of an internal expansion card dial-up modem. Click the image to get a description of each component on the card. 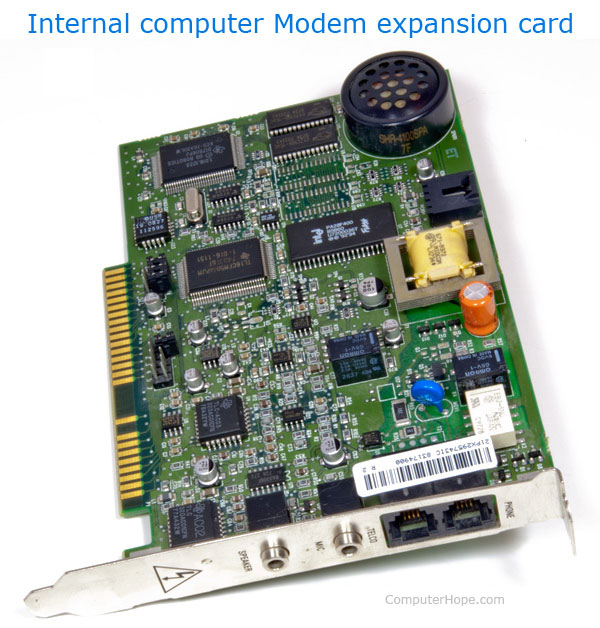 Modems are referred to as an asynchronous device, meaning that the device transmits data in an intermittent stream of small packets. Once received, the receiving system then takes the data in the packets and reassembles it into a form the computer can use.

The above chart represents how an asynchronous transmission transmits over a phone line. In asynchronous communication, one byte (eight bits) is transferred within one packet, which is equivalent to one character. However, for the computer to receive this information, each packet must contain a Start and a Stop bit; therefore, the complete packet would be ten bits. The above chart is a transmission of the word HI, which is equivalent to two bytes (16 bits).

History of the modem

The first modem, known as the Dataphone, was released by AT&T in 1960. It later became more common for home users when Dennis Hayes and Dale Heatherington released the 80-103A modem in 1977.

If you did not grow up on a dial-up modem or you're nostalgic, you can listen to a modem connecting to the Internet in the sound file below. Each time someone connected to the Internet, they heard these noises over the modem speaker.

Why does a modem need to make this noise?

The computer uses a digital signal. However, a phone line that was designed for voices uses an analog signal. The modem makes these noises and tones to transmit digital information over an analog line.

Below are the four versions of a computer modem found in computers.

Onboard modem - Modem built onto the computer motherboard. These modems cannot be removed, but can be disabled through a jumper or BIOS setup.

Internal modem - Modem that connects to a PCI slot inside a newer desktop computer, or ISA slot on an older computer. The internal modem shown above is an example of a PCI modem. 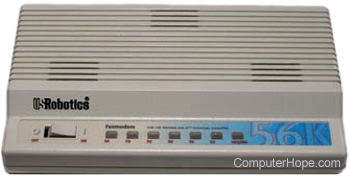 External modem - Modem in a box that connects to the computer externally, using a serial port or USB port. The picture is an example of an external USRobotics modem.

Removable modem - Modem used with older laptops PCMCIA slot and can be added or removed as needed.

What are the speeds of modems?

Modem speed is measured in bps and Kbps, which is the speed the modem can send and receive data. Today, a 56 K (56,000 bps) modem is the fastest solution and speed used with today's dial-up modem.

The line quality that the phone communicates over, and how many collocations it must use, also affects the speed of a modem. Although a modem may be rated as 56 K, if the line quality and collocations are not optimal, you cannot achieve the maximum speed. Also, when a modem establishes a connection to another modem not using the same standard or a lower speed, the lowest speed is used.

A modem may also include some or all of the features and specifications listed below.

Why is a modem an input and output device?

A Modem is considered an input and output device because it sends data (upload/output) and receives data (download/input).