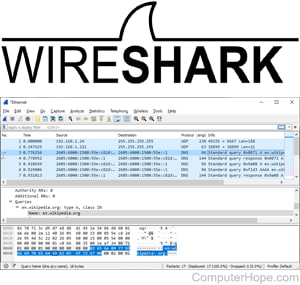 Wireshark is a network packet analyzer used for capturing (sniffing) packets flowing across a computer network in addition to those that are moving to and from your computer. Packet sniffing is primarily used for legitimate purposes such as network troubleshooting or traffic monitoring.

Wireshark is an open-source project licensed under the GPL (GNU Public License), which means users can run it on multiple computers free of charge and can view or modify the source code. It features a plug-in system, so users can create new Wireshark features for others to use.

A network packet analyzer helps discover what happens inside of a network cable, like a powertrain uses a voltmeter to check what takes place inside an electric wire. In the past, such instruments were either very pricey, restrictively patented, or both. The ability of the average user to monitor and analyze network traffic increased significantly with Wireshark's emergence.

Below is an example of Wireshark capturing live data.

Originally known as Ethereal, Gerald Combez began developing Wireshark in 1997, and it was released later in 1998 with some instability. Ethereal changed its name to Wireshark in 2006 because of trademark issues.

Wireshark can parse the structure of multiple network protocols (encapsulation). The fields and their data can be viewed, as defined by the protocols. Wireshark uses the pcap API (libpcap, or Npcap on Windows 7+) to retrieve packets.

Features of Wireshark include:

Why is Wireshark used?

Here are some of the reasons why people use Wireshark:

What Wireshark doesn't do