Kick may refer to any of the following: 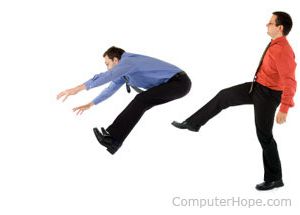 1. Alternatively referred to as boot or kill. Kick is a command used on chat networks such as IRC, where an operator, moderator, or administrator removes a user from the chat system due to misconduct. The user kicked from the chat system receives a message that explains why they were removed. A kill is sometimes accompanied with a timed ban, which prohibits the user from returning for a specified amount of time.

2. Kick is also a command used in online groups to kick another player from your group, party, or from the game.