Short for serial AT attachment, SATA 1.0 was first released in August 2001 and is a replacement for the parallel ATA interface used in IBM compatible computers. SerialATA is capable of delivering 1.5 Gbps (approximately 187 MBps) of performance to each drive within a disk array. It is backward-compatible with ATA and ATAPI devices, and offers a thin, small cable solution, as seen in the "SATA Data Cable" picture. This cable helps makes cable routing easier and offers better airflow in the computer compared to the earlier ribbon cables used with ATA drives. 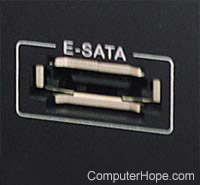 However, eSATA does have some disadvantages, such as not distributing power through the cable like USB, which means drives require an external power source. The eSATA cable also supports a maximum length of up to 2 meters. Because of these disadvantages don't plan on eSATA becoming the only external solution for computers.

What hardware uses the SATA cable?

The SATA cable is most often used with hard drives but is also used with drives, such as disc drives.

Earlier computers used an EIDE or SCSI and not a SATA cable.

How many pins does SATA have?

There are two types of SATA cables. The SATA data cable that transmits the data between the drive and the motherboard has seven pins. The SATA power cable that connects to the power supply has fifteen pins.

How do you pronounce SATA?

Because there has never been an official mention of how SATA is pronounced, we suggest using whichever full word or partial full word version sounds best to you.

Because SATA is pronounced as a full or partial word, it should be preceded with an "a" and not "an" in a sentence.