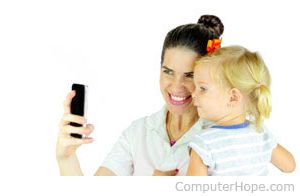 A selfie is a method of photography taken of oneself by oneself, usually at arm's length or into a mirror, popularized by the photographer Jim Krause in 2005. Previously, this procedure was called a self-portrait, but the term "selfie" was popularized with the advent of camera phones, small digital cameras, and social networking sites.

In December 2012, Time magazine noted that selfie was among its the "top 10 buzzwords" of 2012. The selfie had been around for years prior but became popular as more people joined Instagram and Twitter.

What is a selfie drone?

Has anyone died taking a selfie?

Yes. Many people each year die taking selfies. For example, in 2016 over 70 selfie deaths occurred in India when people were taking pictures near railroad tracks and not aware of oncoming trains. Other selfie deaths were caused when taking selfies with weapons and by thrill seekers in dangerous locations.