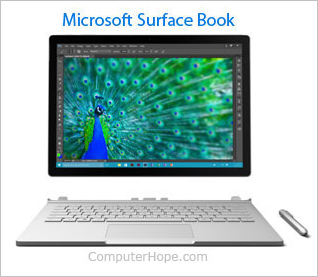 Released on October 26, 2015, the Surface Book is a 2-in-1 laptop with a detachable screen. It was designed and produced by Microsoft as an addition to their Surface line. Unlike Surface devices, which are more like a tablet, the Surface Book can stand upright without the aid of a kickstand. Its most distinguishing feature is a dynamic fulcrum hinge that expands when folding open the notebook.

The keyboard section of the Surface Book contains many traditional laptop ports, the main battery, and an optional discrete GPU. The screen contains all the components of a functional computer, allowing it to function as a tablet when detached from the base. When the screen is detached, it runs for about four hours on its additional battery.

The dynamic fulcrum hinge has a few functional purposes. First, it allows the user to detach the screen. Second, it folds a full 180 degrees so that the screen can lie flat while still utilizing the keyboard's extra battery life and the additional computing power of the optional discrete GPU. Similar to the traditional Surface, the Surface Book utilizes (and includes) a stylus with an active digitizer, called the Surface Pen.