Is it better to leave the computer on or turn it off? 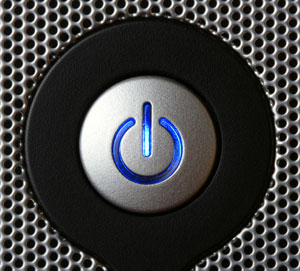 Even though sessions vary with usage, everyone needs to step away from their computers at some point. Many of our users wonder if it's a good idea to leave their computers on, or turn them off. The answer to this question depends on many factors ranging from electricity bills to concerns about wear and tear. The following sections address the "on or off" debate from many viewpoints, allowing you to decide what works best for you.

One of the biggest contributing factors when deciding whether or not to turn off your machine is the electrical cost. A bill for electricity can be expensive, and a computer like many household electronic devices adds to the cost. Unless you'll be away for a very long time from a computer that's on, the difference in price isn't a large concern. However, if you're looking to save a few dollars a month, shut it down.

If you decide to leave your computer on all day, we recommend turning off the monitor if you're leaving for more than half of an hour.

In our opinion, the time for your computer to resume working is a bigger factor than the cost of electricity. For instance, if you open and close your laptop frequently, you don't want to have to reboot it completely each time. Knowing a bit about the different power states of a computer should help you in your decision.

The time to resume from different power states is much more significant on hard disk drives than it is on solid-state drives. Since boot times on modern SSDs are so fast, shutting down your computer is not nearly as much of a factor.

Leaving your computer on overnight

Our recommendation is to turn off your computer when you go to bed, as it saves you a bit of money on your electricity bill. However, for tasks to run during the night (e.g., backup, ScanDisk, Defrag, updates, or a virus scan), you'll need to leave your computer on while you sleep. Unless you don't mind these tasks being performed during the day.

Will turning off a computer wear down moving parts (e.g., fans)?

No. The only moving parts that caused an issue internally were within a component, not the computer itself. In older hard drives, the head would come into contact with the disk platter upon shutdown, which caused it to wear. However, any hard drive manufactured today doesn't have this issue.

Does turning off a computer wear down the power button?

Before 1994, it may have been beneficial to leave the computer on due to potential power switch related issues associated with certain manufacturers that caused the power buttons to break early. However, this issue was only applicable to a very small portion of old OEM computers, and today is no longer a problem. Power buttons can still wear out, but they have a life cycle that outlasts the other components of your computer.

Does turning off a computer cause soldering cracks?

No. Solder can withstand changes in temperature; turning a computer off frequently does not harm it. For example, many individuals turn their TV on and off each day, sometimes several times. Much like a computer, components inside the TV get hot and cool down, and these devices rarely have problems.

Will turning my computer off help prevent a power surge?

No. A power surge destroys electrical devices, regardless of whether they are on or off. Having the power cord connected to a surge protector can safeguard a computer from an electrical surge.

If a storm causes a blackout or brownout, it can cause problems with a desktop computer. To prevent these power-related problems from affecting a computer, use a UPS (uninterruptible power supply).

"As the computer boots, it takes more power."

This statement is not true.

This statement is also untrue. See our surge page for information about power surges.

"Leaving a computer on causes it to overheat."

Unless a fan within a computer fails while it is on, the computer will not overheat.

"A laptop is different than a desktop it should be turned off."

Although physically different, a laptop can also remain on 24/7, and all information mentioned above still applies. The exception here, of course, is if you're running a laptop from the battery (not plugged in). In this case, the laptop is not going to be able to run all day, and we suggest conserving your battery usage.