Shut down may refer to any of the following: 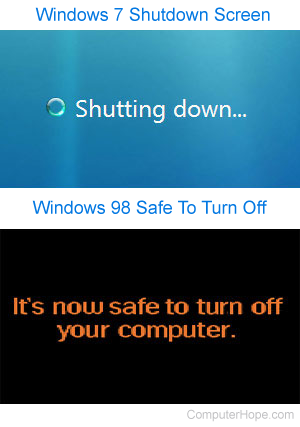 1. Shut down is closing all software programs in preparation to turn off a computer's power. The operating system is the last program to be closed as part of a computer's shut down process. We recommend all computers be properly shut down to help prevent data corruption. The picture shows examples of different Microsoft Windows shut down screens. In the top picture, Windows 7 displays a shutting down message while it is shutting down. Early computers were not capable of turning themselves off, so Windows 98 displayed a message when it was safe to turn off the computer after doing a shutdown.

When should I shut down?

When you and anyone else in your home or office are done with the computer, we recommend it be shut down. For example, you could shut down the computer before you go to sleep for the night.

What is the shortcut key to shut down?

The Alt+F4 keyboard shortcut closes any open program and is also used as a keyboard shortcut to shutdown Windows. From the Windows desktop, press Alt+F4 to open the Shut Down Windows window. If the selected option is Shut down, press the Enter to confirm the shutdown. If you want to choose another action, use Up or Down arrow keys to change to restart or sleep and then press Enter.

With Windows 10, you can also right-click Start and select Shut down or Sign out.

The keyboard shortcut to shut down an Apple computer running macOS is Ctrl+Option+Command+Eject button button.

What is an unclean shut down?

An unclean shut down or unsafe shut down describes when the computer is not shut down properly and can happen because of any of the following.

Is it Shut down, shut down, or shutdown?

For example, the sentence "Instead of using the Start menu Shut down option you could use the shutdown command to shut down the computer." uses all forms of this word.

2. Shutdown is a command line command in Linux and the Windows command line. See the following links for further information about each command.