The phrase drag-and-drop describes the action of selecting an object or section of text, moving it (dragging), and then placing it (dropping) in an alternate area. For example, to drag-and-drop an object, such as an icon, you first move your mouse cursor over it. Then, press and hold down the left mouse button, move the object to the location you desire, and release the mouse button to set it down.

Dragging and dropping an object or file moves it to the new location; it does not make a copy.

How to drag-and-drop on a desktop or laptop

In the image below, you can see the three-step process used to highlight, drag, and then drop files to another location. 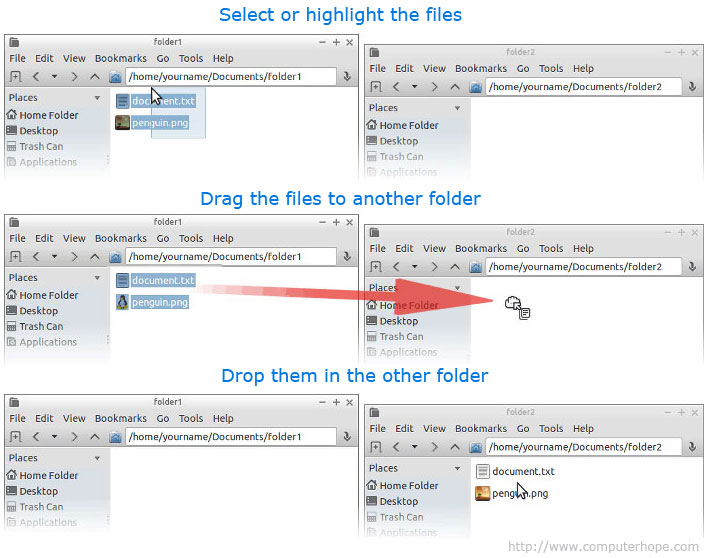 Holding down the Ctrl key while dragging and dropping text or another object copies the object or text.

In Microsoft Windows, if you drag-and-drop with the right mouse button rather than the left mouse button, you're prompted with a menu. This menu gives you options to "copy here," "move here," or "create a shortcut here."

How to drag-and-drop on a tablet or smartphone

How to cancel a drag-and-drop

If you clicked the wrong object when dragging-and-dropping anything, press Esc to cancel the drag-and-drop.

If you've already let go of your mouse button and moved something, overwrote something, or caused another problem the undo feature can fix a bad drag-and-drop action.

What is drag-and-drop editing?

If you hold down Ctrl while dragging and dropping the text, it's copied (duplicated) instead of moved.

How to scroll while drag-and-drop editing?

If where you want to drag the text is not visible, while dragging the text, move to the window edge in the direction you want to scroll. For example, to drag text from the top to the bottom of a document, follow the steps below.

The above steps would work for any direction that you can scroll. For example, if you could scroll up, you could click-and-drag text near the top of the window or document area.

If lots of scrolling is needed to get to where you want to move text, it's easier to cut and paste instead of dragging-and-dropping.