Adapter may refer to any of the following: 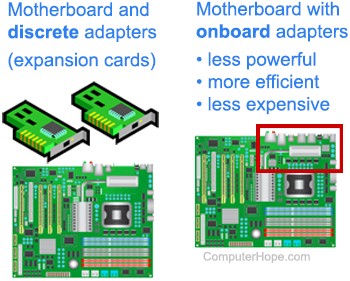 1. In general, an adapter refers to any circuitry or device that enables one type of device to communicate with another.

In your computer, hardware adapters may be "onboard" (soldered directly onto the motherboard). Or, they may be "discrete" (separate hardware, attached to a port on the motherboard, so that they can be removed or replaced).

A SATA controller is an example of an onboard adapter, which allows your motherboard to communicate with SATA devices such as an HDD or SSD.

Both "adapter" and "adaptor" are correct spellings for the term, and either may be used to refer to the same type of device.

2. In regards to connectors, an adapter is hardware that "adapts" one connection type to another. Pictured at right is a PS/2 to USB adapter, which allows a PS/2 keyboard or mouse to connect to a USB port.

3. The term adapter may also refer to an AC adapter or power supply. These devices convert the electricity from a main power source, such as an outlet. The electricity is adapted to the voltage required by electronic devices, such as your desktop computer, laptop, or printer.

4. Adapter is the name of a program for Windows and macOS that converts image or video files from one file format to another. You can find more information at the official Adapter website.