AT may refer to any of the following:

1. Short for advanced technology, AT is an IBM computer first introduced in 1984. The base model AT computer contained an 80286 processor, 256 k of RAM and a 1.2 MB floppy disk drive. The AT was also available with 512 k of RAM and a 20 Mbyte disk drive. Today, an AT-class system is any computer with a 16-bit, 32-bit, or 64-bit system. Earlier computers (8-bit) were known as PC/XT-class systems. All new computers used today are considered AT-class computers and you're not likely to encounter earlier computers. A PC/XT-class computer can be identified if it's using the older 8-bit ISA expansion slot. 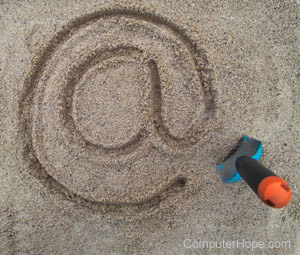 2. Ampersat, asperand, arobase, at, at sign, or at symbol is the name of the " @ " symbol found above the 2 on a U.S. keyboard. When describing an e-mail address, it may be described as "support - at - computerhope - dot - com," which is the same as [email protected]

How to create the @ symbol

Creating the @ symbol on a U.S. keyboard

To create the at symbol using a U.S. PC keyboard, hold down the Shift and press the number 2 near the top of the keyboard.

To create the at symbol using an Apple keyboard, hold down the Option key and press the number 2 at the top of the keyboard.

Creating the @ symbol on a smartphone or tablet

To create the at symbol on a smartphone or tablet, open the keyboard, go into the numbers or symbols (sym) section, and tap the @ symbol.

Creating the @ symbol on keyboards outside of the U.S. 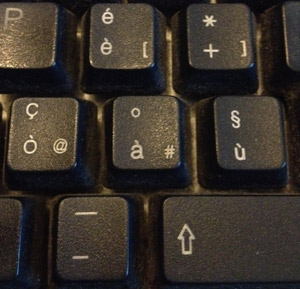 Where is the at sign key on the keyboard?

Below is an overview of a U.S. computer keyboard with the at sign key highlighted in blue.

How is the at symbol used on a computer?

Below are examples of what uses the at symbol on a computer.

6. Modem strings used to initialize and control a computer modem. See the Modem AT commands page for a listing of the basic Hayes compatible legacy modem AT strings. In the picture, is an example of an AT string.

7. A Full AT is another name for the Full AT motherboard.

8. AT keyboard is a Din 5 port used with early IBM keyboards. See our AT keyboard page for further information about this port.

9. AT is short for Azores Time.