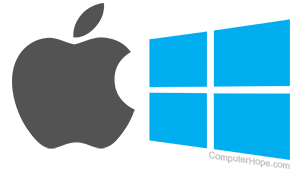 The Mac vs. PC debate is one of the most controversial topics about computers. This page gives an overall comparison between computers running Apple's macOS and those running Microsoft Windows. We are looking to help users who are interested in buying a new computer, not dictating which brand is the "best."

Mac - Traditionally, Macs have had fewer security vulnerabilities. Also, in overall numbers, Macs receive fewer viruses than PCs running Windows. However, these numbers can be misleading as Apple's computers only account for less than 10% of the market share. Consequently, PCs show that they have more vulnerabilities, but if one were looking to infect or illegally access the most computers, PCs are the best target.

PC - More people today are using computers running some version of Microsoft Windows, which makes it a smarter target for attackers. That being said, Windows computers have had more security vulnerabilities than Apple computers in the past.

Bottom line: Mac wins in this category. While newer versions of Windows have made significant improvements in security, most malware is created for PCs. Therefore, you're less likely to run into security issues with a Mac.

Mac - Although many people may argue that "you get what you pay for," compared to a PC, a Mac computer, and its peripherals, is far more expensive from a dollar-to-performance perspective. That being said, Mac computers are well built with high-quality components, whereas some PCs are not.

PC - Many PCs, including their peripherals, are far less expensive than a Mac. They are especially cheaper when customizing the computer's components.

Bottom line: PC wins this category when comparing all computers and hardware. If you compare only high-end hardware, a PC can be nearly as expensive in some cases.

Comparing the operating system is like comparing apples and oranges. Both macOS and Windows 10 are clean, fast, highly capable operating systems. In this category, it comes down to personal preference and the user's specific needs.

Bottom line: Tie, as it depends on the user's preferences.

Windows is put onto PCs by multiple manufacturers, most of which add some form of bloatware. But, it is removable and doesn't mean Windows 10 is an inferior operating system. However, an Apple user has never had to deal with bloatware.

Mac users can utilize Boot Camp to run Windows on their Mac. PC users can also install Linux on their computer and use it in conjunction with Windows or as an alternative to Windows.

The number of software titles for Mac has grown over the years. However, Windows dominates the computer software market, especially with gaming. Developers are more likely to create software for PCs because of its much larger user base. Furthermore, there are hundreds of free programs available for PC that are not available for Mac.

Bottom line: PC wins this category in the overall availability of software and free programs. However, realize that most of the bigger, popular applications, like Microsoft Office products and Adobe products (e.g., Photoshop), are available for both PC and Mac.

Mac - Apple has created a strong ecosystem with Apple products, like the iPhone, iPad, and Apple TV. Purchasing an Apple computer helps you interact with other Apple products more easily using macOS.

PC - Microsoft has a strong ecosystem with Microsoft Office and the Xbox. However, they no longer have any mobile solutions and must rely on Android devices. Also, because there are so many different manufacturers, their ecosystem is not as cohesive as Apple's.

Bottom line: Mac wins this category for anyone who already has Apple products.

Mac - Macintosh computers are known for their exceptional quality across their entire line, including both laptops and desktops. Macs offer a very compact profile regardless of form factor and are aesthetically pleasing.

Although Apple is known for its quality, there are plenty of examples where Apple has made mistakes. For example, recent Apple MacBooks have had a lot of issues with their keyboards.

PC - PCs have always been highly customizable, from cases to internal components. As such, there are many different levels of build quality. Therefore, while you can get very high-quality components for a PC, you can also get those that are of poor quality.

Bottom line: Mac wins this category - but situationally. While the quality of PC components can be as high as an Apple, we're comparing the overall quality of all PCs.

Mac - Apple computers may be customized with several options. All their computers come pre-built and are only manufactured by Apple.

PC - PCs have more pre-built options due to a higher number of manufacturers. Furthermore, for those who want to build a computer, the options for customization are exponentially higher.

Bottom line: Traditionally, Macs were faster to boot up than PCs. However, with the release of Windows 10, PC boot times have decreased dramatically. In some cases, Windows 10 performs faster than macOS. That being said, these differences are negligible when comparing computers with similar hardware. The single biggest component in reducing boot time is the type of hard drive a computer uses. Both Macs and PCs have SSDs available to them, but those who build PCs have much faster options.

Bottom line: Tie when comparing a Mac and PC with the latest operating systems and similar hardware. However, a PC can be built with faster or slower hardware that increases or decreases the boot time.

Mac - Mac has an advantage because Apple is the sole manufacturer of these computers and most of the hardware. Consequently, Apple can control and maintain most of their drivers.

Over the years, computer game companies have shown increased support for Macs. However, Windows owns 90% of the market share, and as such, developers are far more likely to create games for that operating system. Additionally, because custom-built desktop PCs have more upgrade options (e.g., latest graphics card), they can meet and exceed the demands of new games without needing to replace the computer.

Mac - When needing technical support or help with your Mac, Apple can offer a lot of assistance that is not available for PCs. Because Apple designs and builds their computers, you only need to deal with Apple when you have problems. Also, Apple has many stores around the world that offer in-person support and help with using Apple products.

PC - If you purchase an OEM PC (e.g., Dell or HP), support can be hit or miss, depending on the OEM and the type of problem you're having. Also, while there are plenty of repair shops that fix computer problems, they are not specialized for one brand of computer, and they offer no training. Finally, if you build your own computer, you'll be dealing with many different manufacturers for support.

Mac - Apple strives to make its Mac product line as sleek and compact as possible. To do so, they continue to further integrate their components. Thus, when their computers need to be repaired, it's more expensive. Apple also makes it very difficult for anyone but them to repair their products. Although this helps make sure the repairs are done correctly, it can also increase the costs and make it harder to get your computer fixed.

PC - Desktop PCs repairs and can be done by any local computer repair shop. However, some PC laptop repairs can be as expensive and difficult as an Apple laptop.

With desktop and laptop computers (not mobile devices), Mac offers no touch screen capability, only the Touch Bar on some MacBooks.

Not all PC's are the same

There are many PC manufacturers, and thousands of models of computers, which means not everything mentioned above applies to every PC.

My Apple can run Windows

Microsoft Windows can run on Apple computers using Boot Camp, which means not everything above may apply to your Mac. In the case of gaming, you can sometimes run the latest games on your Mac using Boot Camp. However, Boot Camp is not perfect, and it does not mean every game can run on your computer since PC games are not developed with Apple hardware in mind. Thus, it's also very possible to encounter problems and have performance issues.

Windows XP is over 18 years old. Comparing a Windows XP computer to a new iMac with macOS is like comparing a Ford Pinto to a Ferrari. When deciding between any computer, make sure you compare the latest models with similar hardware components.

I still cannot decide on what type of computer to get

Finally, if you're still having difficulties deciding what type of computer to buy, use the following link to guide you in your buying decision.