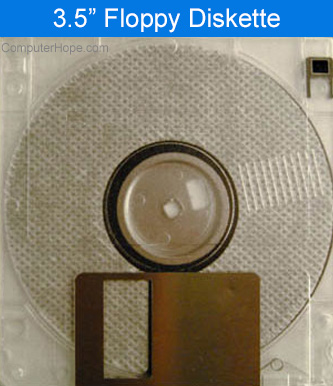 Alternatively called a floppy or floppy disk, a floppy diskette is a storage medium capable of holding electronic data, like a computer file. The floppy diskette was created in 1967 by IBM as an alternative to buying hard drives, which were extremely expensive at the time.

The picture is an example of a 3.5" floppy diskette, one of the most commonly used floppy diskettes, capable of storing 1.44 MB of data. To read and write to this diskette, it is inserted in a floppy drive.

How were floppy disks used?

Early computers did not have CD-ROM drives or USB; floppy disks were the only way to install a new program on a computer or back up your information. If the program was small (less than 1.44 MB for the 3.5" floppy disk), it could be installed from one floppy disk. However, because most programs were larger than 1.44 MB, diskettes were usually required. For example, the diskette version of Windows 95 came on 13 DMF diskettes and was installed one disk at a time.

Floppy disks were also a common place for users to store and back up their files. For example, a word processing file could be copied to a floppy disk and opened on another computer or stored as a backup.

There are still a few diehards who are using floppy diskettes, and some government agencies still even use the 8" version. However, since the early 2000s, computers no longer shipped with floppy disk drives as users moved to CD-R and Zip drives, and later USB jump drives as capacities rose and prices fell. All the latest versions of Microsoft Windows also no longer include support for internal floppy drives because new computers do not come with them.

If you have a new computer and want to read old floppy diskettes, you may purchase a USB floppy drive that works with all the latest computers.

How does a floppy disk store data?

A floppy drive is a magnetic medium that stores and reads data on the floppy disk using a read head. When a 3.5" floppy diskette is inserted into the drive, the metal slide door is opened to expose the inner magnetic disk. The read/write head uses a magnetic polarity of 0 or 1. Reading this as binary data, the computer can understand what the data is on the platter. For the computer to write information to the platter, the read/write head aligns the magnetic polarities, writing 0's and 1's that can be interpreted later by another device. 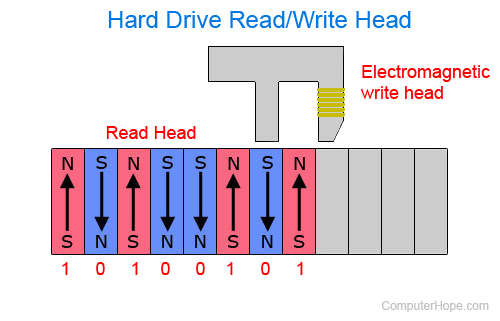 The history of the floppy disk and drive

Below is a brief history of each of the three major floppy diskettes.

The first floppy disk was introduced in 1971. It was 8" in diameter with a magnetic coating, enclosed in a cardboard case with the capacity of one megabyte. Conversely to hard drives, the heads touched the disk, like in a cassette or video player that wears the media down over time.

The 5.25" floppy diskette first started development in 1976 and became a standard in 1978. These disks were originally released with only 160 KB of disk space. They were common in the 1980s and stopped being used in the early 1990s with the advent of the CD-ROM drive. See our 5.25" floppy diskette definition for further information, pictures, and related links.

The 3.5" floppy was created by IBM in 1984 and came with a total capacity of 720 KB. The 1.44 MB floppy diskettes were used widely in the 1990s and were seldom found or used by 2000. See our 3.5" floppy diskette definition for further information, pictures, and related links.